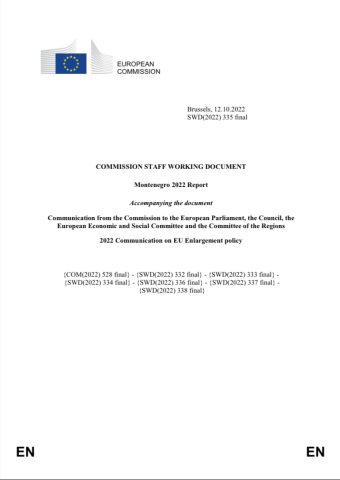 According to the European Commission’s report, this was another year in which Montenegro made limited progress in implementing the war crimes prosecution strategy.

The report acknowledged the continuation of good regional and international cooperation, the first joint commemoration of war crimes committed in Morinje in 2021 by representatives of the Republic of Croatia and Montenegro, and the first attendance of Montenegrin officials at the commemoration of the anniversary of the deportation of refugees, where the families of the victims were offered a public apology after 30 years.

However, although the Human Rights Action naturally supports all the above, we would like to draw attention to the fact that, even after 30 years, good regional cooperation did not manage to contribute to bringing the persons convicted of war crimes against civilians in the Klapuh case to justice, as we have repeatedly pointed out. The Republic of Serbia refuses to extradite one of them (Zoran Vuković) to Montenegro, while Bosnia and Herzegovina is not interested in prosecuting the second and third – Radomir Kovač and Zoran Simović.

The report also indicated that the Special State Prosecutor’s Office (SSPO) filed another indictment for war crimes with the High Court in Podgorica in June 2022. However, there has been no publicly available data on this to date. The indictment was not even mentioned in the SSPO’s regular reports on the implementation of the Strategy for the Investigation of War Crimes.

For the first time in 8 years, this year’s report did not contain any criticism of Montenegro concerning the impunity of war crimes, the lack of self-initiated action of the state prosecution, the non-application of criminal law institutes such as complicity, aiding, incitement and command responsibility, or the incorrect application of international humanitarian law in final judgments. We believe that there are no reasons for this, because the SSPO has not yet reviewed old cases in which judgments were issued in violation of international law, in accordance with the Strategy, nor has the prosecution initiated any investigations on its own initiative, or filed any indictments in connection with command responsibility, complicity, incitement or aiding a war crime since the adoption of the Strategy in 2015.

One trial for war crimes committed against the civilian population is under way against the defendant Slobodan Peković, born Ćurčić, in the case that was ceded to Montenegro by Bosnia and Herzegovina. It has not been announced that any orders were issued regarding investigations in any other war crimes cases.