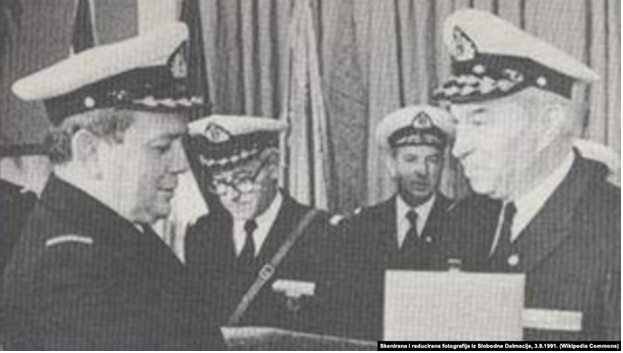 31 years ago today, the admiral of the Yugoslav People’s Army (YNA) Vladimir Barović took his own life in protest against the 1991 order of the YNA high command to shell coastal towns in Croatia from the island of Vis. In his note, he wrote that he chose to die an honourable death “because Montenegrins cannot fight and destroy people who have done nothing wrong to them”.

Barović’s tragic act testifies to what a man in his situation could do in 1991 to stand up to the madness where those in the position of power were deciding the fate of millions of people. After his death, the insane order to shell Dalmatian cities was abandoned. He killed himself in order to save others, and thus warned them about humanity and honour.

However, the YNA aggression against Dubrovnik began just a few days later, including more than 7,000 mobilised citizens of the Socialist Republic of Montenegro (for additional information, see the text “Montenegro and the war in Croatia”). Montenegro should cherish the memory of Admiral Barović for at least three reasons: to educate new generations about the meaning of humanity; to teach them history and educate them for peace, not war; and to develop relations of cooperation and friendship between the peoples of Montenegro and Croatia, which Barović protected with his own life.

To this day, there has been no official initiative to permanently preserve the memory of Barović in Montenegro with some sort of a memorial. Considering the respect he enjoys in Croatia, we believe that an event should be established in his memory that would permanently connect the people of these two countries.

The Human Rights Action welcomes this year’s important event. Namely, on 12 September, officials of both Montenegro and the Republic of Croatia attended the unveiling of a memorial plaque dedicated to Admiral Barović in Vis, Croatia, where Barović served and ended his life. Last year, for the first time, the two countries also jointly marked the site of war crimes in front of the former military camp in Morinje, Montenegro. These are the first good signs of reconciliation and a joint confrontation with the past after the President of Montenegro, Milo Djukanović, in the presence of the President of the Republic of Croatia, Stipe Mesić, apologised to the citizens of the Republic of Croatia in 2000 “for all the pain, all the suffering and all the material losses that were caused by any representative of Montenegro as member of the YNA in those tragic events”.

It was only in 2016 that the President of Montenegro, Filip Vujanović, posthumously honoured Admiral Barović for his bravery, on the initiative of the NGO Civic Alliance. It was not his family that received the medal, but the then commander of the Navy of Montenegro.

Attached is ​​a photo from the newspaper “Free Dalmatia” of the last farewell to Vladimir Barović from his neighbours in Split. He lived in Vis Street (!), in Bačvice:

“Even though you lived in our building for just a short time, we all loved you, and we appreciated your friendship and the way you cared for those around you. May you find eternal peace in Croatia, our dear Vlado, a country which you did not even want to shoot at, much less use your soldiers against. You will always remain in our hearts”.