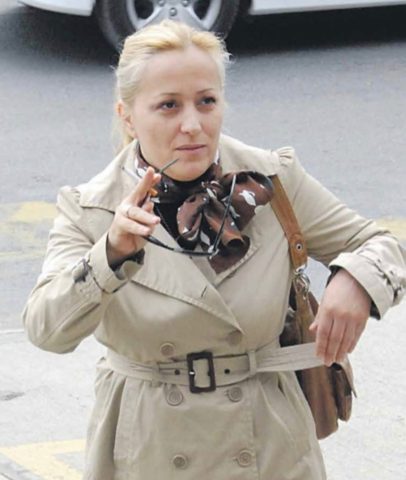 On Friday, December 11, 2020, the Montenegrin daily newspaper “Dan” published information indicating that, in the May of this year, an assassin was being recruited for the murder of journalist Olivera Lakić at the Spuž penitentiary. The Human Rights Action expresses great concern for her safety, especially because to date, no one from the Special State Prosecutor’s Office or the Police Administration addressed her about this issue.

“Dan” announced that “in his testimony before the special prosecutor, cooperating witness B.P. gave details of how and why the assassination of journalist Olivera Lakić was planned in May this year within the walls of the prison in Spuž. From this and other allegations made in the text entitled “I would give you 150 thousand just to eliminate her”, it is concluded not only that the witness gave this statement to the Special State Prosecutor, but that the statement was in the meantime included in the Prosecution’s indictment as credible. To date, Olivera Lakić has not been officially informed about any of this by the Special State Prosecutor, nor has she been offered protection.

The Human Rights Action calls upon the Special State Prosecutor and the Police Administration of Montenegro to inform the public on the following matters without delay:

1) What has been done so far to urgently and thoroughly, in accordance with the standards of effective investigation, investigate allegations that there are several members of a criminal group interested to murder journalist Lakić? Are they connected to the attack on her in May 2018?

2) Why wasn’t she immediately officially informed that her life was in danger?

3) Why did they not provide her with protection in a situation where there is testimony of a plot to assassinate her which the SSP, having included it in its indictment, apparently deems to be credible?

We emphasize that the state is obliged to protect the right to life and security of Olivera Lakić.

Ineffective investigation of this case, as well as previous attacks on Olivera and other journalists seriously endanger the freedom of expression in Montenegro and the country’s progress towards the European Union. The state must serve its purpose, the state prosecutor’s office and the police must protect the endangered human rights of the journalist.

We remind that the journalist Lakić has already been the victim of physical attacks twice, that she has been threatened several times, and to date it has not been determined who ordered the attacks and threats. The investigation of the latest attack on Lakic has not yet been completed or yielded any results, despite more than two years having passed since the incident.

Olivera Lakić was first attacked with blows to the head in March 2012 in front of the entrance of the building in which she lived in Podgorica, and then, at the same place, she was wounded by a firearm on May 8, 2018. She was repeatedly threatened from 31 January to 10 February 2011 for a series of articles she published in the daily newspaper ”Vijesti” on illegal production and smuggling of cigarettes at the ”Tara” factory in Mojkovac and its warehouse in the suburb of Podgorica – Donja Gorica, and the connection of those activities with the Police Administration and the National Security Agency. Threats were also issued against her daughter and her daughter’s roommate, who were studying abroad at the time. After that, in May 2014, she was again threatened by a friend of her attacker from 2012.

Only Slavko Musić, employed by the owner of the ”Montenegro Tobacco Company”, who first threatened her in 2011, was sentenced to four months in prison, and Ivan Bušković, who attacked her in 2012, was sentenced to nine months in prison. Milan Grgurović, who falsely confessed to threatening her, was acquitted and it was never determined why and on the behalf of whom he incriminated himself. Milenko Rabrenović, a close friend of the director of the Police Administration Veselin Veljović, was also released for threatening the journalist, her daughter and her daughter’s roommate. Siniša Stojković, the head of the criminal police in the regional unit Budva, was released from accusations of influencing the proceedings against Rabrenović, as well as Dejan Čurović and Ivan Siništaj due to threats from May 2014.

When it comes to the injuries from May 2018, almost two years after the opening of the investigation, neither the perpetrators nor the direct perpetrators have been discovered yet. In the latest report on Montenegro, the European Commission expressed particular concern that the case had not yet been resolved.

In 2016, the Human Rights Action published the report “Threats and attack on Olivera Lakić, the journalist of the daily newspaper ”Vijesti” (January 2011-May 2014)” and here we republish its conclusions:

“Due to a series of texts about the illegal production and smuggling of cigarettes, which were brought in connection with police officers and the National Security Agency, journalist Lakić became a victim of a series of threats and physical attacks. The prosecution of these attacks has been accompanied by numerous controversies and the influence of high-ranking civil servants. Thus, one person tried to mislead the investigation with a false confession, the director of the Police Administration said that the journalist’s attacker was convicted because the police planted evidence on him. The head of the criminal police in Budva tried to influence the prosecutor to suspend the procedure against his colleague due to his threatening of the journalist Lakić, and the president of the Supreme Court showed a special interested in that procedure.

The State Prosecutor’s Office chose the middle way – striving to prosecute all executors of threats and the attack on the journalist, but not to identify a person that had ordered these threats and attack, not to thoroughly investigate the illegal production and smuggling of cigarettes that Lakić wrote about and which made her a target, nor to investigate the disappearance of evidence in this regard. The journalist’s efforts and sacrifice in the interest of citizens have thus remained futile, with the epilogue of this case being the fact that the rule of law in Montenegro is not yet a guarantee, and that the public continues to lose its confidence in the willingness of the Police Directorate and State Prosecutor’s Office to ensure it.

In the said case the courts punished only one person who threatened Lakić and her attacker with minimal sentences. Two police officers were acquitted – one accused of making threats, and the other accused of illegal influence on the public prosecutor to suspend the prosecution of the former. Both acquittals were based on a controversial interpretation of the facts and legislation. The epilogue of the second case is that the police officer did not rank high enough to be able to exercise unlawful influence on the prosecutor, although the law imposes no such requirement. The fact that the police officer accused of threatening the journalist was very close to Chief of the Police and that the Supreme Court President expressed her interest in the proceedings against him supports the suspicion that in both cases the judges were not impartial. In addition, the court found that the person who had falsely accused himself of threatening the journalist could not be held criminally responsible, in the case of threats for which a police officer was prosecuted afterwards. It was never exposed why he had tried to mislead the investigation. Ultimately, the court also suspended the proceedings against Lakić’s attackers’ friends who threatened her last, finding that there was insufficient suspicion that they had committed the crime of Endangering Safety.

In conclusion, the courts have failed to see all these procedures in the context that deserved to be taken into consideration with utmost concern – that the journalist Olivera Lakić had been the victim of continuous threats and even physical assault with the intention of intimidating and discouraging her to continue her research into the illegal production and smuggling of cigarettes in Montenegro – a business that former and current public officials at the Police Directorate and NSA are most likely linked to, according to the unconvincing response of all competent state authorities in the case of assault on the journalist. For threats and the attack on journalist Lakić only two persons, who are not influential and against whom the evidence was fairly apparent, received light sentences, while it has been ensured that the investigation does not reach the organiser of the attack. “