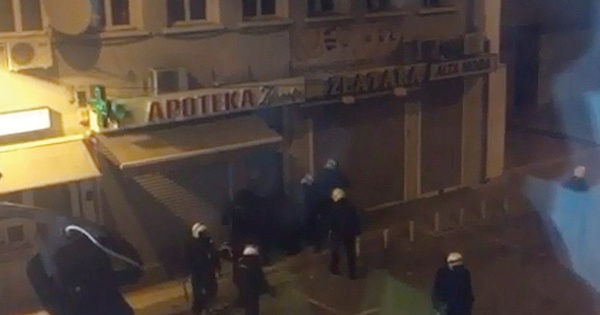 “The decision of the Constitutional Court not to insist with the Government to identify state officers who participated in torture of citizens is disappointing”, stated the Executive Director of the NGO Human Rights Action, Tea Gorjanc-Prelević, who represented Branimir Vukčević and Momčilo Baranin, victims of police torture, before the Constitutional Court of Montenegro.

The Constitutional Court previously adopted constitutional appeals of Vukčević and Baranin and established that the State Prosecutor’s Office failed to conduct a proper investigation in relation to police torture on Podgorica’s streets following political protests in October 2015 and that the Police Directorate did not cooperate in the identification of responsible civil servants. Yesterday, upon the decision in the case of Branimir Vukčević, the majority of judges of the Constitutional Court refused the proposal of the judge rapporteur that the Constitutional Court finds the decision not executed and obliges the Government to secure that the Police Directorate cooperates with and State Prosecutor’s Office in identifying police officers responsible for the torture of citizens.

“The proposal of the judge rapporteur Miodrag Iličković, supported by judges Mevlida Muratović and Milorad Gogić, was another noble attempt to correct human rights violations in the country so that the Montenegrin police brutality does not appear before the European Court of Human Rights. Unfortunately, most of the judges in the Constitutional Court nevertheless decided not to criticize the Government and hence failed to make the constitutional complaint a truly effective remedy”, HRA executive director stated.

HRA recalls that the Government of Montenegro provided support to its officials who tortured citizens by failing to provide for their identification, as well as the Director of the Police Directorate, Interior Minister and Special Police Anti-Terrorist Unit Commander to resign because their officials in Podgorica in October 2015 had brutally beaten up at least 30 innocent citizens, including Milorad Martinović, Branimir Vukčević and Momčilo Baranin, who were recognized as victims of police torture by the Constitutional Court.

It is sad that in the country, whose citizens have very well-educated attitudes about the absolute ban on torture, torture is supported at the highest level of authority. (According to a survey conducted by HRA in 2012, 79% of Montenegrin citizens considered that every kind of torture should be prohibited, even if it would use to bring information that would save the lives of other people. Montenegro in that belief that torture should be absolutely prohibited was the closest to the attitude of the citizens of France, Great Britain and Spain – see more in detail: https://www.hraction.org/2012/04/18/18-04-2012-survey-attitudes-on-torture/?lang=en.

The fact that all civil servants who brutally beat citizens and who have hidden them from criminal prosecution continue to work in the Police Directorate encourages further use of police torture in Montenegro.