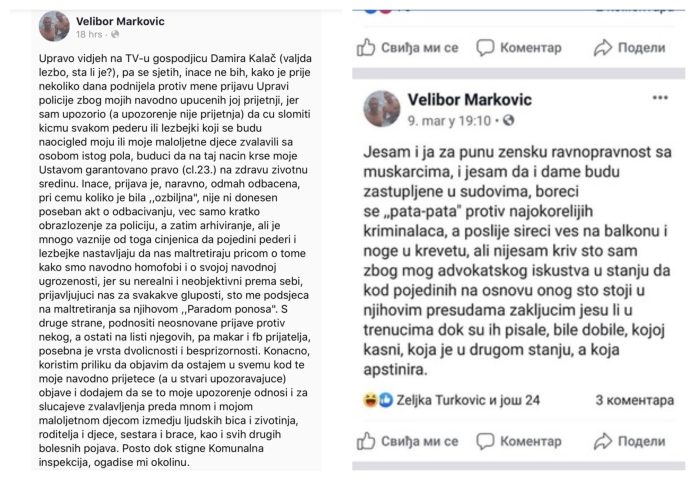 The executive director of the Human Rights Action (HRA), Tea Gorjanc Prelevic, refused the invitation to participate in the work of the expert team, which would examine the conformity of the provisions of the Basic Agreement of Montenegro with the Serbian Orthodox Church, with the legal order of Montenegro, thereby expressing protest over the inclusion of lawyer Velibor Marković in the work of this team. In the letter to the president of the country, Mr. Milo Đukanović, Gorjanc-Prelević thanked him for the invitation and explained that Marković is known to the public for promoting homophobia and sexism, i.e. intolerance towards the LGBTIQ community and women, specifically, female judges, and that HRA does not want to cooperate with a person who promotes discrimination and hatred.

Gorjanc-Prelević stated: “I protest the inclusion of attorney Marković in the work of a public group that is supposed to contribute to the public interest. Common good cannot be built on the denial of rights to, and the humiliation of, any people in a society, including the LGBTIQ community and women”.

Nevertheless, HRA has already expanded its initial opinion on the Basic Agreement of Montenegro and the Serbian Orthodox Church, by including new sources and enriching it with arguments, in view of the publicly stated positions contesting it. We have been working on the proposal to enable the disputed provisions to be formulated in a way that will harmonise them with the legal order, and will submit it to the President of the State and the Prime Minister and publish it on the HRA Internet presentation.

We hope that Montenegro will still conclude a contract with the Serbian Orthodox Church that will be harmonized with its legal order.