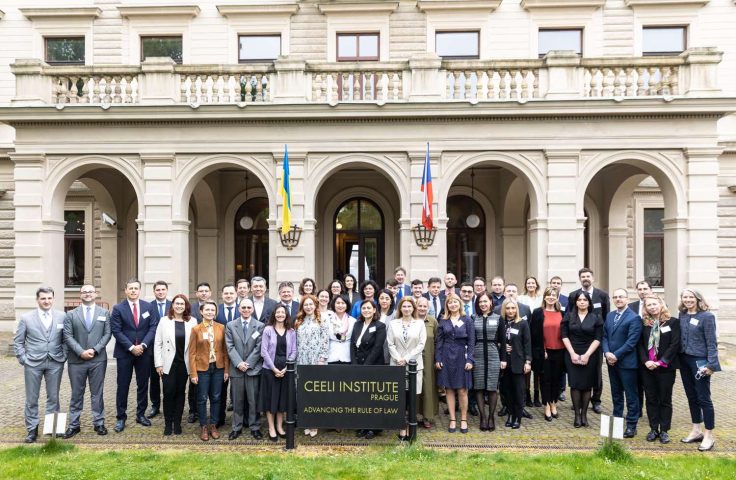 The Executive Director of Human Rights Action, Tea Gorjanc Prelevic, participated at the conference on judicial independence in Central and Eastern Europe.

At the gathering of participants from 22 countries, she was the only one from Montenegro and one of the few people who were not judges.

The conference was held on 6-7 May in Prague, and was organised the CEELI Institute – Central and Eastern Law Initiative.

Below are some of her notes from the conference:

“Where there is a legal culture and a tradition of protecting the rule of law – there are no problems. We have to raise the level of that culture in our countries” (judge from Hungary).

“While citizens of Western countries have no problem experiencing their states as their own – they pay taxes and demand services – we, by force of circumstance, still perceive the state as someone else’s, and it constantly serves the interests of others” (judge from Poland).

“There is no sufficient knowledge of how the one-party, communist-socialist system affected the judiciary and what negative consequences it left, and that would be an important thing to know” (judge from Hungary).

“Judicial councils can help the independence of the judiciary and improve confidence in it only if they are independent of political influence. The European Network of Judicial Councils has provided some good recommendations on how to achieve this in relation to Council members who are not judges: by not electing current and recent politicians into it” (T.G.P.).

“In Croatia, there is a myth that judges of the Judicial Council are always unanimous” (judge from Croatia).

In Bulgaria, all sessions of the Judicial and Prosecutorial Councils are broadcast live on YouTube.

The Czech Republic is one of the few countries that do not have a Judicial Council, where the Minister of Justice still appoints judges. Court presidents have much influence, but the level of independence is nevertheless high (judge from the Czech Republic).

“Even today, after massive reforms that have reduced their excessive influence, court presidents can make things difficult for judges by changing the legal matter in which they act, by giving them a small office, by not assigning them a typist, advisor, etc., and judges have no one to complain to” (judge from Croatia).

In Slovakia and the Netherlands, judges are subjected to tests of analytical thinking (in the Netherlands, even some professors did not manage to pass them). In Slovakia, judges are required to take a psychological test at every election and promotion. After serving in the European Court of Human Rights, their judge had to take a psychological test before he was elected to the Supreme Court.

In some countries, judges are questioned by members of the parliament as part of the election procedure. For a Dutch judge who was elected to the Supreme Court this was a formality, a pleasant conversation over coffee, while a judge from Georgia said that she was questioned for ten hours, and that the event was one of the worst memories of her life.

In Bulgaria, lustration has been underway for 8 years. The files of people who cooperated with the state security service have been opened. Every year, the commission submits reports on the lustration results to the parliament.

“Vetting” – checking the assets of judges and prosecutors and their links to crime – has been carried out in Albania for several years now. It was decided to start doing this because more than 80% of citizens and more than 60% of judges believed that the judiciary was corrupt. A female judge from Albania, who had passed the vetting process, said that the process was undoubtedly necessary, but that there is a need to prepare for the ‘day after’ – to make sure, on time, that there would be enough people. Of the 50 judges in her court, only 30 remained. They are currently in such need for judges that they have significantly lowered the criteria for election.

OSCE-ODIHR is preparing a guide on vetting, based on the experiences of Albania, Kosovo and Moldova.

Romania is planning to adopt a law on compulsory education of children in elementary school on the foundations of law and the legal system in the country. The project of educating children in schools, initiated by a judge, is already widespread. Judges spend time with children answering their questions about rights. Interestingly, sometimes they do not know how to answer the children’s questions.

The Judicial-Media Council has been operating in Macedonia for several years. It is made up of judges and journalists, chaired by a journalist, and its goals are understanding and cooperation between the two professions, transparency, and citizens’ trust in the judiciary.

A judge from Croatia, a court PR officer, believes that it is best for a court PR officer to be a judge, who should also receive the necessary training. It is important that s/he is available when needed, because journalists will most certainly publish the text. He said that he once prepared and gave a statement while on vacation, from his fishing boat.

“Judges should communicate with the public on time, before the populist politicians take all its attention” (judge from Poland).

“Judicial councils should protect judges from random name-calling and insults, e.g. by members of the parliament, but there is nothing else they can do but hold a press conference and talk to the president of the other branch of power” (judge from Serbia).

The Slovenian Supreme Court has a department that investigates the degree of satisfaction of citizens with the services provided by that court. They have concluded that it is very important how parties are treated from the moment they enter the court building. “People must be treated with respect, with awareness that courts and other state institutions exist to serve the people, not the other way around” (head of department).

Slovenia no longer has a binding norm for judges, so judges are only informed about what sort of performance is generally expected of them. This has led to a drop in productivity, but they believe that it will also raise the quality of the work and result in equal treatment of difficult cases (instead of concentrating on those that are easy in order to meet the norm).

Poland pays the European Commission EUR 1 million in fines each day because of the law on disciplining judges, which violates their independence. So far, the state has paid a total of EUR 138 million. In this country, the Minister of Justice is simultaneously the Supreme State Prosecutor. Until recently, this person was even the president of a political party, despite the fact that the law prohibits state prosecutors and judges from being members of political parties.

This is the 73rd day of the war in Ukraine. Larissa is a judge in a region that is not occupied by Russia and her court is open for business. Her son and husband are in the army. She saw her son a few days ago, when she was helping to deliver humanitarian aid to the army. More than 100 courts in Ukraine are currently out of operation. The Commercial Court was partly destroyed by a bomb. A judge and an associate from another court were killed. One judge of the Supreme Court is in uniform. President of the Supreme Court is redistributing cases to those courts that are still working. Before the war, they did have plans to reform the Judicial Council… Larissa would like the war to end immediately, but says that they are not discouraged. They help each other, and are determined to defend their country for as long as it takes.