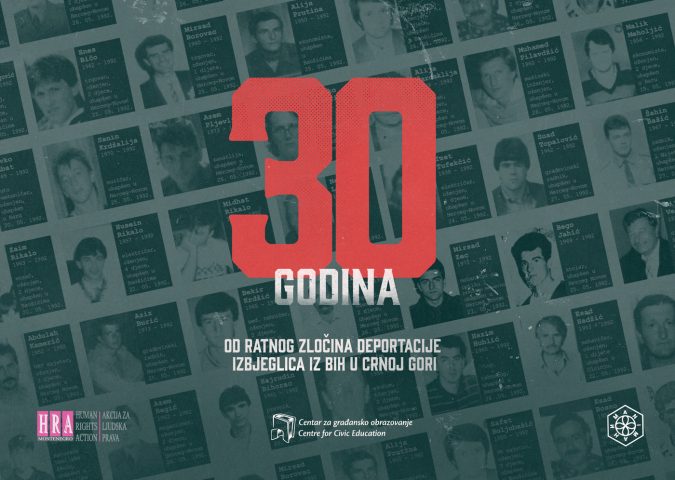 Tomorrow, on 25 May 2022, at noon, in front of the Herceg-Novi Security Centre, NGOs Human Rights Action (HRA), Centre for Civic Education (CCE) and ANIMA – Center for Women’s and Peace Education are organizing a memorial gathering to mark 30 years since the deportation of Bosnian refugees from Montenegro in 1992.

This is the 18th time that unofficial Montenegro pays tribute to the victims of this war crime, and the 13th time that the anniversary is marked in front of the police building in Herceg Novi, from where most refugees were forcibly taken and extradited to the Army of Republika Srpska in Bosnia and Herzegovina.

As every year, we will lay flowers and pay tribute to the victims.

We invite the media to join in marking the anniversary of this war crime.

We especially emphasize that for the first time this year, we will be joined by the Minister of the Interior in the Government of Montenegro, Mr Filip Adžić, and the Director of the Police Administration, Mr Zoran Brđanin.

We remind you that in May 1992, the Montenegrin police illegally arrested at least 66 civilians, mostly Muslims, aged 18 to 66, who escaped to Montenegro from the war that was already raging in Bosnia and Herzegovina, and handed them over as hostages to the army Bosnian Serbs led by Radovan Karadžić and Ratko Mladića to serve them for exchange of prisoners of war. Written documents testify to this fact. All those extradited from Herceg-Novi on 27 May 1992 were killed shortly afterwards, while another group was sent to the Foča concentration camp (KPD) on 25 May 1992, and only a few survived. All bodies of victims deported from Herceg-Novi on 27 May 1992 have not yet been found, nor is the place where they died known. Also, at least 33 Serbs from Bosnia and Herzegovina were arrested and extradited to the army of the Serb Republic (later called the Republika Srpska) for mobilization, and it is not known if any of them were killed.

The victims of this crime are indisputable, Montenegro paid compensation to their families after a four-year trial based on a settlement in 2008 due to the illegal actions of the Montenegrin police, which led to tragic consequences. That they were illegally arrested in Montenegro and extradited as hostages as established by a final criminal verdict in Montenegro, as well as by the verdict of the Hague Tribunal in the Krnojelac case (manager of the Foca camp). However, it is disputable that the courts in Montenegro were not able to recognize the war crime and punish it. A group of mothers, daughters and sisters of the victims filed a petition with the European Court of Human Rights because Montenegro did not provide criminal justice in this case nor respected the human right to life and the prohibition of torture, and the Human Rights Action represents them in the dispute.

HRA, CCE, ANIMA and a former member of the Council for Civil Control of Police Work, Aleksandar Saša Zeković, 11 years ago, sent three initiatives to the then authorities, which have not been accepted to date:

1) to the President of the Parliament of Montenegro, Ranko Krivokapić, and all heads of parliamentary clubs to declare a Day of Remembrance for the victims of the crime of deportation of refugees in 1992;

3) that the Montenegrin police issue a public apology for the illegal arrest and extradition of refugees to the enemy army of the Serb Republic of B&H.

On the occasion of the 30th anniversary of the crime, we have prepared a short video reminder of all memorial gatherings organized by civil society in Montenegro since 2005, when such a gathering was firstly organized by the Humanitarian Law Center, led by Nataša Kandić and the Group for Change, led by Nebojša Medojević.