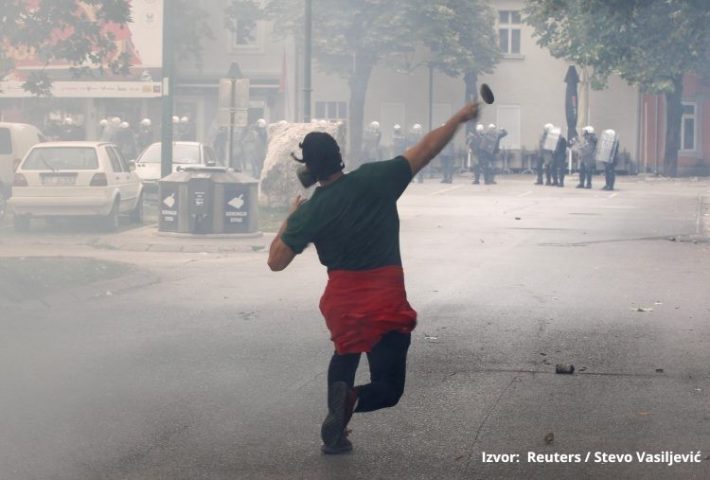 The Human Rights Action (HRA) finds the events surrounding the enthronement of the Metropolitan of the Serbian Orthodox Church in Cetinje to have posed a significant risk to peace, owing to the exacerbation of national and religious divisions for political purposes. Fortunately, there were no human casualties, and the state of Montenegro has mainly succeeded in ensuring respect for human rights to freedom of religion, on the one hand, and freedom of peaceful assembly, on the other, in a highly demanding situation. Nonetheless, the implementation of health measures for protection of the right to life and health during Covid-19 pandemic had not been provided and the freedom of the media to report from public gatherings was again endangered. All complaints regarding excessive use of force by the police should be investigated and all those who violated the law should be prosecuted, protesters and police officers alike.

In the increasingly intolerant public discourse rife with nationalistic polarisation, HRA strives to recall the imperative of the rule of law and respect for human rights. Bellow in more detail.

The state has an obligation to ensure respect for human rights even in very complex situations such as the one that occurred in Cetinje, where the rights of demonstrators to freedom of expression and peaceful assembly and the rights of the religious community, the Metropolitan of Montenegro and the Littoral of the Serbian Orthodox Church, to religious freedom in the form of the rite of enthronement of the metropolitan stood opposed.

The European Court of Human Rights has repeatedly emphasized that these rights are equally protected, that none of them are absolute and that they cannot be interpreted in a way to allow anyone who disagrees with a religious organization in any way to prevent them to hold a religious rite, to interrupt it or disturb public order during the holding of that rite (see judgments of the European Court of Human Rights, for example, in cases Bulgaru v. Romania, decision, 2012; Karaahmed v. Bulgaria, judgment, 2015). Also, preventing and obstructing religious rites is a criminal offense, punishable by a fine or imprisonment for up to three years (Art. 161 of the Criminal Code of Montenegro – Violation of the freedom to practice religion and perform religious rites).

The state was obliged to ensure respect for the opposing rights by safeguarding the enthronement of the Metropolitan in the Cetinje Monastery, as well as a peaceful protest against that rite.

Although the state did ensure that the ceremony in Cetinje was held, by a helicopter transport of the Patriarch and Metropolitan to Cetinje, not all of the priests who planned to attend the ceremony were present, because the demonstrators blocked the roads leading to Cetinje. These blockades were allowed by the police and the priests returned to Podgorica. If a court were to decide on that, it would have to examine whether the police correctly assessed that breaking the roadblock could have had disproportionately greater harmful consequences overriding the right of the priests to exercise their religious freedom.

On the other hand, the protest in Cetinje in some segments exceeded the framework of a peaceful assembly. Freedom of peaceful assembly does not protect those who attack the police with stones, explosive devices or break through police cordons (as established by the European Court of Human Rights in the judgments of The Archbishop against Turkey, Oya Ataman v. Turkey, Razvozzhayev v. Russia, Primov v. Russia), all of which was recorded in Cetinje yesterday, and the state prosecutor’s office therefore already initiated certain proceedings.

Also, although it is true that the state is obliged to tolerate illegal gatherings that have not been reported to the authorities in accordance with the law – as was the case with the protest in Cetinje – such obligation exists only until such gatherings become a “real danger to public order or constituted an intentional serious disruption by the demonstrators to ordinary life and to the activities lawfully carried out by others to a more significant extent than that caused by the normal exercise of the right of peaceful assembly”(Mushegh Saghatelyan, § 246). “The intentional failure by the organisers to abide by these rules and the structuring of a demonstration, or of part of it, in such a way as to cause disruption to ordinary life and other activities to a degree exceeding that which is inevitable in the circumstances constitutes conduct which cannot enjoy the same privileged protection under the Convention as political speech or debate on questions of public interest or the peaceful manifestation of opinions on such matters. (Kudrevičius v. Lithuania, § 156).

The demonstrators in Cetinje blocked all entrances to the city in order to make it impossible to hold a religious rite. The authorities tolerated even such kind of assembly, the goal of which had clearly been to “intentionally seriously endanger the lawful performance of activities by others”, until the very time came for the rite to take place. Even then, the roadblock was not broken, only the Patriarch and Metropolitan were transported to the Cetinje Monastery by a helicopter, while other priests were forced to give up attending the rite.

A special issue is whether the police, when intervening in Cetinje near the monastery they were safeguarding, proportionally applied the permitted means of coercion (tear gas, shock bombs), or whether they used rubber bullets, which the Police Directorate claimed they did not have. All this requires careful investigation of each individual case. In principle, the police have the right to use coercive measures when their officers are attacked with stones or direct physical force, which did happen in Cetinje as established by video recordings. The Police Directorate stated the police did not use rubber bullets and called for every case of injuries to be reported in order to investigate it. All videos about the intervention of the police and the actions of the demonstrators should be submitted to the competent state authorities and it should be insisted that all reports of illegal behavior be investigated. The state has a special obligation to investigate every case of a report of excessive use of force by its officials.

Common to all gatherings, both in Podgorica and Cetinje held on September 4 and 5 was a complete disrespect of health measures. The regulations were violated in terms of the prescribed maximum number of people who could attend a public gathering (50 people at a distance of 2 meters and a maximum of 30 minutes), the prescribed distance when performing a religious rite (one person per 10m2 while keeping a distance of 2 meters), people did not wear masks nor was distance respected. We believe that it is completely unreasonable and extremely irresponsible to tolerate non-compliance with these measures in a situation in which 1770 people have died from the corona epidemic in Montenegro until today, about 500 of them get sick every day, as many as 15 died the other day, where is it Montenegro now the third country in the world in terms of the total number of cases of coronavirus infection and the seventh in terms of the total number of deaths per million inhabitants (www.worldometers.info/coronavirus).

During the reception of Patriarch Porfirio, a case of obstruction of the Pobjeda reporter was reported, and at the protests in Cetinje, the obstruction of the N1 television journalist team, some individual reporters, as well as bloggers from Bosnia and Herzegovina to report from that event. We condemn all obstructions to the freedom of the media; we call for responsibility to be established for such actions and for those responsible to be sanctioned in accordance with the applicable regulations. We again appeal that the prevention of journalists and attacks on journalists in the performance of their professional activities be urgently prescribed as criminal offenses.

Having in mind the reasons for holding the protest in Cetinje, we condemn any disrespect for the statehood of Montenegro, the Montenegrin national identity and the Montenegrin Orthodox Church, as a religious community in Montenegro. All disputes, including the ownership of churches and temples by religious communities and the right to use those churches and temples, must be raised and resolved in accordance with the law, without compromising freedom of religion and endangering anyone’s safety.