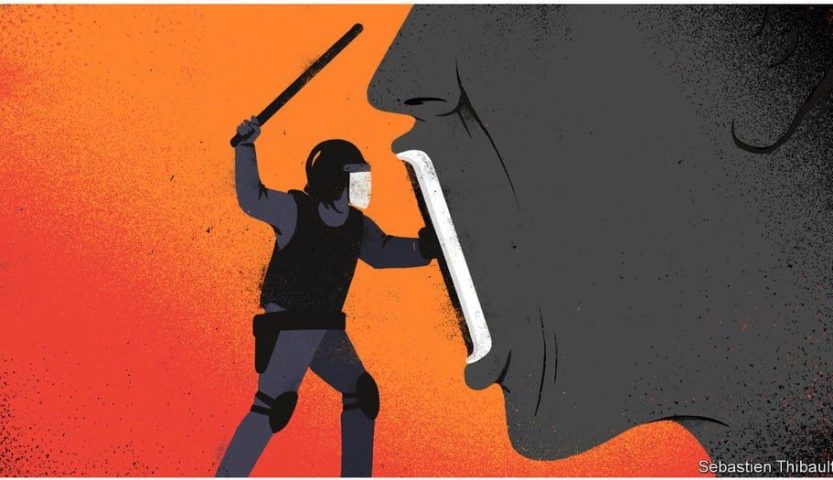 Ilustration: Sebastien Thibault for The Economist

HRA protests the arrest of R.R. from Danilovgrad for posting insulting comments for President Milo Djukanović and DPS MP Petar Ivanović on his Facebook profile.

Judging by the available information, he wrote that Djukanovic would, through the third package of measures, “once again give a d…” (meaning “nothing”) to the citizens, while for Ivanović he wrote he was “one big piece of s…”.

HRA warns again that depriving people of liberty for expressions that do not call for violence nor constitute hate speech is contrary to international standards of free speech.

HRA reminds that insult was abolished in Montenegro as a criminal offense in 2011, but that it still survives as a tool for diminishing freedom of expression in Article 7, paragraph 2 of the Law on Public Order and Peace, on the basis of which this last case was processed.

Previously, G. M. from Nikšić was fined with 500 euros on the same legal basis for insulting the director of the Police Department on the social network. In that case, the HRA assisted in writing the complaint, which was upheld by the higher court, and the case was remanded for retrial.

The article of the Law on Public Order and Peace also envisages imprisonment, which was abolished already in 2003 for the criminal offense of insult in Montenegro.

We believe that this legal provision is being abused to provide for recriminalization of insult contrary to international standards. Furthermore, previously in Montenegro, insult and defamation as criminal offenses could only be prosecuted on the basis of a private criminal lawsuit, while now it is the police who are prosecuting people, and the state prosecutors are not opposing it.

HRA emphasizes that one of the basic principles of freedom of expression in a democratic society is that public figures, especially government officials and politicians, should tolerate an increased level of criticism, which includes “insults, shocks and harassment” in the context of a debate on a matter of public interest. The European Court of Human Rights pointed out that “any measures interfering with freedom of assembly and expression other than in cases of incitement to violence or rejection of democratic principles – however shocking and unacceptable certain views or words used may appear to the authorities – do a disservice to democracy and often even endanger it“ (Sergei Kuznetsov v. Russia, 2008, para.  45).

HRA urges the police, state prosecutors and judges of misdemeanor courts to adhere to international standards of freedom of speech, essential in a democracy, and to stop applying measures making Montenegro look like a police state. Citizens in a democratic society have the right to view reality and take a stand on the basis of different views and information from different sources, without the paternalistic state censorship.

Article 7, paragraph 2 of the Law on Public Order and Peace reads: “Whoever in a public place grossly insults another or otherwise behaves particularly arrogantly, shamelessly or insultingly, shall be fined from 250 euros to 1,000 euros or imprisoned for up to 60 days.