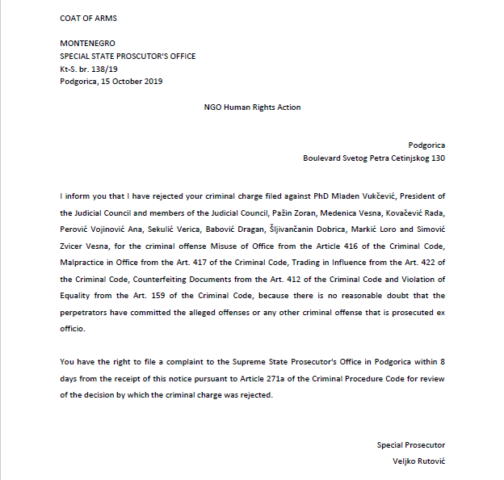 The Special State Prosecutor, Mr. Veljko Rutović, rejected the criminal charge submitted by the three non-governmental organisations the Human Rights Action (HRA), Network for the Affirmation of the NGO Sector (MANS) and Institute Alternative (IA) on 13 September 2019 against members of the Judicial Council of Montenegro based on suspicions that, in July 2019, the Council’s members committed criminal offences by grossly violating regulations in the process of selecting candidates for judiciary positions in the basic courts of Montenegro by public contest (No. 01-2491/19-30). The NGOs believe the Council’s members committed the following criminal offences: Misuse of Office (Article 416 of the Criminal Code (CC)), Malpractice in Office (Art. 417 of the CC), Trading in Influence (Art. 422 of the CC), Counterfeiting Documents (Art. 412 of the CC) and Violation of Equality (Art. 159 of the CC).

The charge was rejected by a formalistic statement (“there is no reasonable doubt that the perpetrators have committed the alleged offenses or any other criminal offense that is prosecuted ex officio”) without further reasoning.

The Special State Prosecutor’s Office has not contacted the NGOs, nor the proposed witnesses, nor did it provide any information about taking any action in order to verify allegations from the criminal complaint.

It is worth noting that the complaint by NGOs highlighted gross violations of procedure for appointing judges, particularly regarding conducting and evaluating interviews, and preventing conflicts of interest especially regarding Vesna Medenica, the president of the Supreme Court, who evaluated the written test and interview of her counselor, of a daughter of her best friend – maid of honor, and of the son of her long-time deputy in three positions. The examination was conducted improperly and positive interview scores were arbitrarily assigned, thereby damaging the candidates who were not selected as well as the public interest for objective and lawful appointment of judges.

HRA, MANS and IA will file a complaint to the Supreme State Prosecutor for review of the decision by which the criminal charge was rejected. In spite of all the circumstances, we will nevertheless continue to take all necessary actions that should lead to adequate reactions of the state bodies administering the rule of law.

The translation of the decision rejecting the criminal charge is available here.