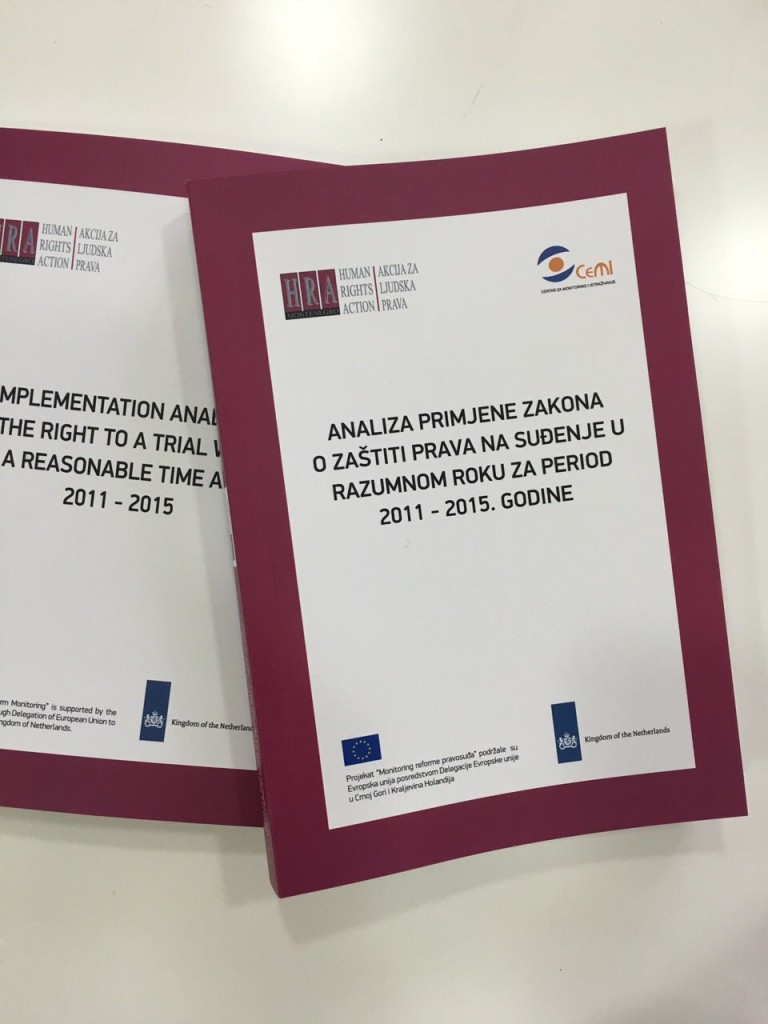 The remedies for the protection of the right to a trial within a reasonable time, the request to expedite the proceedings and claim for just satisfaction are in minor use, compared with the size of backlog before the courts in Montenegro. Both remedies in practice are still not sufficiently effective for speeding up the trials and protection of the right to trial within a reasonable time.

In the period 2011-2015 the presidents of courts granted only every fourth request to expedite the proceedings, while the Supreme Court upheld every other claim. In more than a quarter of cases, in which the Supreme Court found a violation of the right to a trial within a reasonable time, requests to accelerate the proceedings had previously been rejected by final decision. The research conducted on representative samples shows that in, 2/3 of the cases, granting of a request for review did not lead to acceleration of the procedure within the statutory deadline of 4 months.

The presidents of courts should review their decision-making upon request for review and ensure that in any case in which they accept the request for review it leads to acceleration of the procedure within the statutory deadline.

In the practice of the Supreme Court there is no clear criterion for determining the amount of just satisfaction (non-pecuniary damages), as applied by the European Court of Human Rights. It has not been ensured that a judgment adopting the claim and establishing a violation of the right leads to an urgent conclusion of the proceedings.

Below are more detailed conclusions and recommendations of the research conducted by the lawyer Darka Kisjelica within the project “Judicial Reform Monitoring”, conducted by the NGO Human Rights Action (HRA) and the Center for Monitoring and Research (CeMI) with the support of the European Union and the Kingdom of the Netherlands. The publication is available in Montenegrin and English language.

DELAY IN PUBLICATION: The study was meant to be published in April 2016, but was delayed first by refusing of the Basic Court in Podgorica and Higher Court in Podgorica to provide access to information and then by eight months delay of the Agency for Protection of Personal Data and Free Access to Information to decide on appeals against the courts’ decisions. The Agency violated the statutory deadline for deciding on appeals thirteen times and than the administrative inspection failed to sanction such behavior. This illegal conduct of state authorities is an illustrative example of a systemic obstruction of reforms in Montenegro.

We hope that the adoption of these recommendations will lead to effective protection of the right to a trial within a reasonable time in each individual case in Montenegro.

[1] The sample consisted of 42% of cases completed in this manner. The sample would be twice the size if the President of the Basic Court in Podgorica to access information.

[2] The sample consisted of 28% of cases completed in this manner. The sample would be three times higher that the President of the Basic Court in Podgorica to access information.