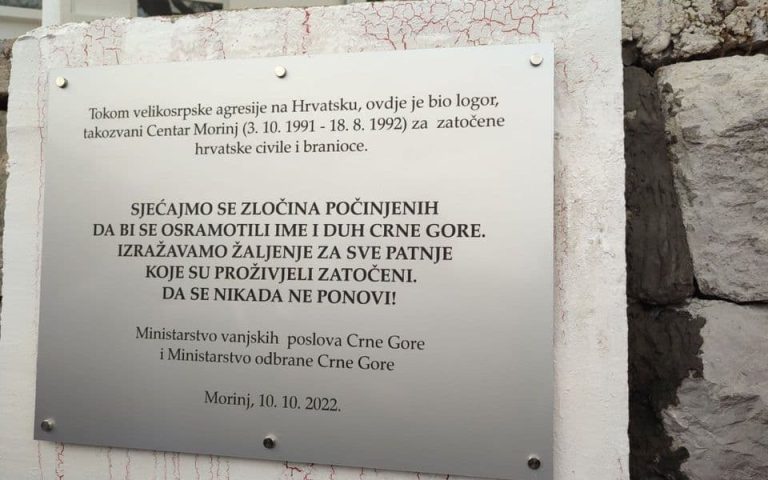 Last year we also welcomed the laying of wreaths at the entrance of the Morinj camp by senior delegations from the Ministries of Foreign Affairs of Montenegro and Croatia. We believe that such steps make an important contribution to the establishment of reconciliation in the region. We expect that all places where war crimes were committed in Montenegro will be marked with memorials.

The memorial plaque was previously requested by prisoners of the Morinj camp from Croatia, and in this they had our and other non-governmental organizations support from Montenegro, which have been devotedly dealing with issues of dealing with the past for decades. We especially welcome the efforts of our colleagues from the Center for Women’s and Peace Education ANIMA, who in 2019 submitted an initiative to the authorities in the municipality of Kotor to erect a memorial on the site of the former camp.

However, we regret that such important events are carried out on short notice, without timely informing the public, inviting representatives of civil society organizations and peace activists, who would demonstrate that there is significant support for this type of building a culture of memory in Montenegro. We believe that for Croatian camp prisoners would be important a meeting with those from Montenegro who have been reminding of their sufferings, while the authorities, both local and national, have been silent about it.

We remind that the final criminal verdict of the Higher Court in Podgorica established that war crimes were committed against prisoners of war in the form of physical abuse in the JNA collection centre in Morinj, and that four people were sentenced to prison – Ivo Gojnić to two years, Boro Gligić to three years, Spiro Lučić to three years and Ivo Menzalin to four years. We remind that in the judgment, it was established that “an atmosphere of terror and fear for bare life ruled in the Morinj Collection Center to which the victims were constantly exposed”.

One of the investigators, Zoran Dragović who was in charge of the prisoners, also spoke about the abuse in the camp in front of the court: “The head of one of guard division was B.P, who was beating the prisoners, … and one of them experienced terrible beatings in Morinj from which he barely survived, and after leaving Morinj he had to perform several surgeries … he knows that B. took prisoners out and trained box on them … the worst were the groups of guards from Herceg Novi, because they identified themselves with characters from movies such as are Rambo, Sandokan, and they were proud of their bullying attitude, without giving importance to honour and the uniform they wear…”.

We regret that this event was marked by protests of enraged individuals, and we expect that the parties in which these individuals are officials and activists at the local level will distance themselves from this act.