LAWSUITS AGAINST A SMEAR CAMPAIGN 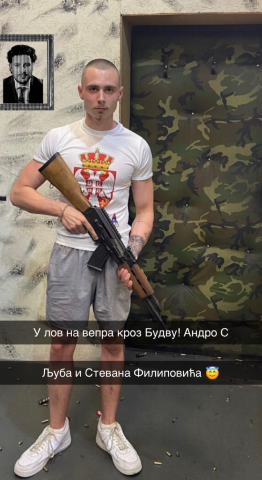 Human Rights Action yesterday appealed to acting Supreme State Prosecutor Maja Jovanović, Minister of Internal Affairs Filip Adžić and Director of the Police Administration Zoran Brđanin, to urgently and thoroughly investigate and process direct death threats addressed to Ljubomir Filipović, political analyst and executive coordinator of the Civic Initiative 21 May and film director Stevan Filipović on the Instagram, due to their publicly expressed opinions. Both men were threatened via social networks by a person who photographed himself armed, with the inscription “On a boar hunting through Budva, Ljubo and Stevan Filipović”.

The absence of an urgent and decisive reaction by all competent authorities may only encourage calls for violence against people because of their opinion, which is absolutely illegal and unacceptable in a democratic society. The state must defend the right to freedom of expression against those who want to crush it with weapons. We are only a step away from the use of physical violence against dissenters and this must be decisively prevented.

Of particular concern is the fact announced by Ljubomir Filipović that he received the first similar threats a month ago, when he reported them to the Police Directorate, the competent prosecutor’s offices and the Ministry of Internal Affairs, and that since recently, the film director from Belgrade, Stevan Filipović, had also been included in the threats.

We called on the State Prosecutor’s Office and the Ministry of Internal Affairs to inform the public about the actions taken in these cases and appealed to the police to provide adequate protection to persons who are continuously receiving direct death threats.