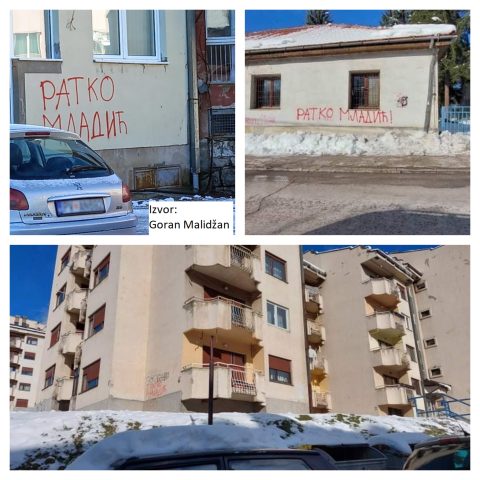 In recent months, graffiti with the inscription “Ratko Mladic” have been written in three places in Pljevlja, inciting hatred against the Bosniak people, because they celebrate a man convicted of genocide, i.e. deliberate mass killings of thousands of unarmed Bosniak people and children during the war in Bosnia and Herzegovina. One sign from the public parking service building was removed, but the other two not, one on the GM4 residential building in Moćevac and the other on the former military facility, which is now a COVID clinic. Human Rights Action (HRA) urges for removal of remaining graffiti and to identify and punish the authors in accordance with the legal order of Montenegro.

The following is an explanation of the relevant legal regime.

Writing any graffiti on the facades of buildings, public areas and communal facilities is, as a rule, prohibited and punishable, regardless of their content, because it distorts the appearance of the facilities. The exceptions are murals, which require permission.

If graffiti contains messages of hatred, insults others on the basis of nationality, race or religion, ethnic origin, gender, sexual orientation or other personal characteristics, or advocates fascist, chauvinistic, Nazi and homophobic ideas, it is additionally prohibited and more severely punishable, because they contain elements of misdemeanor under Art. 9a of the Law on Prohibition of Discrimination, Art. 18, 19 and 19a of the Law on Public Order and Peace or criminal offenses Provoking Ethnic, Racial and Religious Hatred under Art. 370, Racial and Other Forms of Discrimination under Art. 443 or Violation of Equality under Art. 159 CC of the Criminal Code of Montenegro.

Owners of private houses, apartments and business premises in buildings have an obligation to maintain the appearance of the facade, and an obligation to remove graffiti at their own expense. Funds for that should exist in the building maintenance fund, which apartment owners are obliged to regularly renew according to the Law on the Maintenance of Residential Buildings. If the owners do not remove the graffiti within 24-48 hours, they can be fined in the amount of 500 to 10,000 € under the law. On the other hand, the perpetrator can be fined in the amount of 30 to 2,000 € and is obliged to compensate the owners who suffered during the removal of graffiti.

If graffiti appears on state-owned buildings, then the obligation to remove them is on the state institutions to which those buildings are entrusted for use, in accordance with the Law on State Property.

It is forbidden to write graffiti on communal buildings and public areas, such as public parking lots, cemeteries, markets, squares, bridges, roads, garages, sidewalks, etc. (Article 17 of the Law on Communal Services). If companies, other legal entities, entrepreneurs and individuals who are obliged to maintain these facilities in an orderly and aesthetically correct condition do not remove the graffiti with elements of hate speech written on them, they can be fined for the misdemeanor in the same range as apartment owners.

HRA appeals to all authorities to react promptly to such and similar occurrences and to adhere to the legally prescribed obligations in order to get rid of public space from hate pollution.

HRA also appeals to all citizens to report the hate speech they noticed in every public space to the Police Directorate, the competent state prosecutor’s office, and the Communal Inspection. The report can also be anonymous.

A more detailed explanation of the legal advice in Montenegrin set out in this release is available here.