EXPERT OPINION: REVIEW OF INTERVIEW TRAINING IN THE MONTENEGRIN POLICE 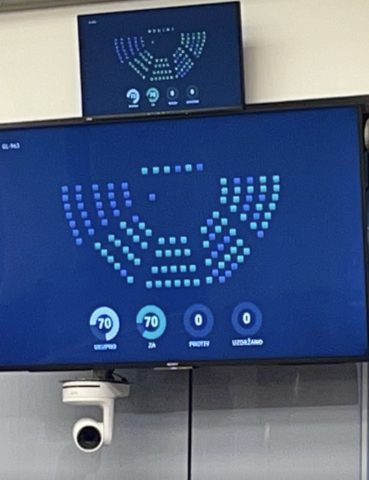 Last night, on 29 December 2021, the Parliament of Montenegro unanimously, with 70 votes of all present deputies including both the majority and the opposition, adopted the amendments to the Criminal Code, which prescribe stronger criminal protection of journalists.

Congratulations and thanks to all those who voted for these amendments as well as to all non-governmental organizations that supported the proposal of the Human Rights Action and Trade Union of Media of Montenegro. We expect that this unanimous position of the Assembly will be recognized as an uncompromising resistance to any kind of violence against journalists and obstruction and prevention of their work in Montenegro.

Special thanks go to MP Marko Milačić, who submitted proposals for amendments to the Criminal Code, as well as the Ministry of Justice, Human and Minority Rights, the Head of the Ministry Sergej Sekulović, State Secretary Boris Marić and their advisor professor Zoran Stojanović, who helped to fit the proposal more adequately.

The amendments to the Criminal Code prescribe qualified forms of criminal offenses Endangering Safety, Aggravated Murder, Serious Bodily Injury, and Coercion, when committed against a person who performs the job of public information, in connection with the performance of that work. Also, the criminal offense of Preventing the Printing and Dispersal of Printed Matters, Broadcasting and Publishing Information has been reformulated to provide more stringent penalties for obstructing or preventing the publication of information of public importance through the media. Stricter punishment is prescribed if the perpetrator is an official.

It is also significant that the Parliament rejected the amendment proposed by the Democratic Party of Socialists (DPS), for punishing those who “behave harshly and insolently” threatening the “peace of mind” of the person publishing an opinion. If adopted, this would again provide for criminalisation of insult, and threat to freedom of expression, as it, according to the case-law of the European Court of Human Rights, includes offensive, exaggerated, and provocative speech. The same proposal, which was presented at a public debate in Serbia, received justified criticism from prominent lawyers, writers, and journalists. The adopted amendments to the Criminal Code in Montenegro hence also bear regional importance.

The proposal to amend the Criminal Code of Montenegro to strengthen criminal protection of journalists was made already in 2010 and presented to the public by the HRA working group, consisting of Judge Ana Vuković and lawyers Veselin Radulović, Tamara Durutović, Dušan Stojković, Peter Noorlander, and Tea Gorjanc Prelević, director of HRA. In addition to prescribing qualified forms of Aggravated murder and Serious Bodily Injury, the group proposed introduction of two new criminal offenses, Attack on Journalist in the Performance of Professional Tasks and Prevention of Journalist in the Performance of Professional Tasks, modelled on similar criminal offenses that protect officials in the performance of official duties.

Since 2014, the Trade Union of Media of Montenegro, together with the HRA, has been advocating for changes to the Criminal Code to strengthen the criminal protection of journalists. This year, they were joined by seven other NGOs: the Institute for Media, the Civic Alliance, the Association of Journalists of Montenegro, the Association of Professional Journalists, the Center for Civic Education, the Media Center, and the NGO 35mm.

The long standing work of Human Rights Action in this field has been supported by the Open Society Institute and Foundation through several years of institutional support and the Australian Embassy through the project “Reform of the Criminal Code for the Benefit of Freedom of the Press”.