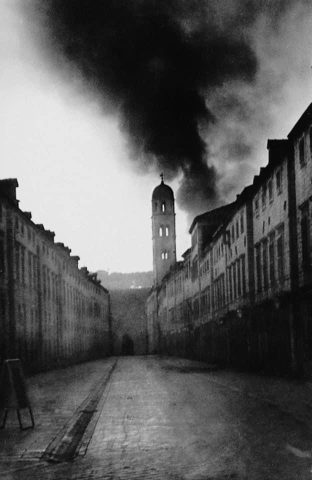 Human Rights Action (HRA), Centre for Civic Education (CCE) and Documenta – Center for Dealing with the Past remind that on this day, 30 years ago, the Yugoslav People’s Army (JNA) conducted the heaviest shelling of Dubrovnik during the siege of the city, which lasted from 1 October 1991 to 31 May 1992.

On that 6 December 1991, 19 people lost their lives, while 60 were injured and wounded. The Old City, which has been on the UNESCO World Heritage List since 1979, was also shelled, and the library of the International University Centre was burned, along with about 20,000 titles. Many valuable old buildings were damaged, as well as the main street of Dubrovnik – Stradun. The young Pavo Urban, whose last 12 photographs testify about the shelling of the old part of the city, was killed on Stradun at the time, with a camera in his hand. It is less known that the first victim of the shelling of Dubrovnik, ironically, was the poet Milan Milišić, a Serb by nationality, who died at his home.

Most of the JNA reservists who took part in the attack on Dubrovnik, over 7,000 of them, were from the territory of Montenegro. “Military operation Dubrovnik was a conquering, destructive and looting campaign against the Republic of Croatia, specifically in the Dubrovnik area,” wrote historians Professor Dr. Šerbo Rastoder and M.Sc. Novak Adžić.

The State Prosecutor’s Office of Montenegro, in cooperation with the State’s Attorney Office of the Republic of Croatia, must prosecute crimes committed during the war in the wider Dubrovnik area, and the Montenegrin and Croatian Governments should continue to jointly mark the anniversaries of crimes so that they do not happen again.

Although numerous war crimes were undoubtedly committed during the war in the Dubrovnik area and the Siege of Dubrovnik – 116 civilians lost their lives, 194 Croatian fighters and 165 JNA members from Montenegro were killed, 443 people were detained in the Morinj (Montenegro) and Bileća (B&H) camps in inhumane conditions, 33,000 people were exiled, 2,071 residential buildings were destroyed and organized looting of private and public goods was carried out (data available to Documenta), the city of Dubrovnik was without electricity and water for 138 days and suffered 240 days of naval and air blockade – Montenegro prosecuted and punished only four who participated in the abuse of prisoners in the Morinj camp in Montenegro.

According to a public opinion poll conducted by the HRA in June 2020, the attack on Dubrovnik was recognized as a war crime by 83% of respondents, but over half of respondents said they were insufficiently informed about Montenegro’s role in the wars of the 1990s. The CCE survey showed that half of those who know about the attack on Dubrovnik, refuse to answer the question of who is responsible for that attack.

For crimes committed during the Siege of Dubrovnik, the Hague Tribunal sentenced only JNA colonel-general Pavle Strugar from Montenegro to seven and a half years in prison and Admiral Miodrag Jokić from Serbia, who admitted guilt, to seven years in prison for crimes. No one else has been prosecuted before international or domestic courts for war crimes committed against the Old City and the wider Dubrovnik area.

In 2000, the President of the Republic of Montenegro, Milo Đukanovic, expressed his regret to “all citizens of the Republic of Croatia, especially those from Dubrovnik and Dubrovnik-Neretva County, for all the pain, suffering and all material losses caused by any Montenegrin representative in the JNA in these tragic events.” Nine years earlier, the Government of the Socialist Republic of Montenegro, headed by Đukanovic, along with its presidency headed by Momir Bulatović, had announced through the then few media outlets, the daily Pobjeda and Television of Montenegro, that Croats intended to conquer Boka Kotorska, and with such war propaganda significantly contributed to the mass response to the mobilization.

However, not all Montenegrins were for the war, not even those in the JNA. We remember the resistance of Counteradmiral Krsto Đurović and Admiral Vladimir Barović, as well as the song of Montenegrin liberals led by Slavko Perović from the protest in Cetinje “From the top of Lovćen a lady cries, forgive us Dubrovnik.“ The anti-war movement, consisted of numerous politicians, professors and students, including those who are still active in public life, such as Rade Bojović, Nebojša Medojević, Džemal Perović, Žarko Rakčević, Prince Nikola Petrović Njegoš and others, was very active in Montenegro at that time.

There are no indications that the State Prosecutor’s Office of Montenegro has ever seriously and on its own initiative investigated crimes on the Dubrovnik battlefield, although European Union expert Maurizio Salustro explicitly recommended that they do so in 2014 and although Ivica Stanković, a former State Supreme Prosecutor, theoretically planned to do so according to the 2015 War Crimes Prosecution Strategy. It is also unknown whether the Special State Prosecutor’s Office undertook investigative actions regarding the information received by the HRA from  the State’s Attorney Office of the Republic of Croatia on 26 February 2021, that several cases were pending against Montenegrin citizens and persons residing in Montenegro accused of war crimes committed in Dubrovnik during 1991 and 1992. For the past six years, the Special State Prosecutor’s Office in Montenegro, which is responsible for processing war crimes, has been headed by Milivoje Katnić, who exercised power in conquered Cavtat during the siege of Dubrovnik as a JNA officer.

We expect that, finally, after 30 years, systematic dealing with the past will become a priority for the authorities in Montenegro. We expect justice to be provided for victims of war crimes, court proceedings to be initiated and appropriate verdicts to be passed in order for Montenegro to relieve itself of the burden of collective responsibility, because as Admiral Vladimir Barović said in his farewell letter, the JNA aggression against Croatia was contrary to Montenegrin honour. Prosecuting those responsible for war crimes is the state’s obligation under domestic and international law, an urgent task in the EU accession process and a moral debt to the victims.

Vesna Teršelič, Director, Documenta – Center for Dealing with the Past, Zagreb

On the occasion of the 30th anniversary of the shelling of Dubrovnik, the Human Rights Action, Documenta and the Centre for Civic Education support the online campaign conducted by the SENSE Transitional Justice Centre from Pula Dubrovnik 1991 – Targeting monuments. Today we publish photos of Pavo Urban about the shelling of Dubrovnik. The campaign program is available here. Documenta will publish a list of victims by name today.