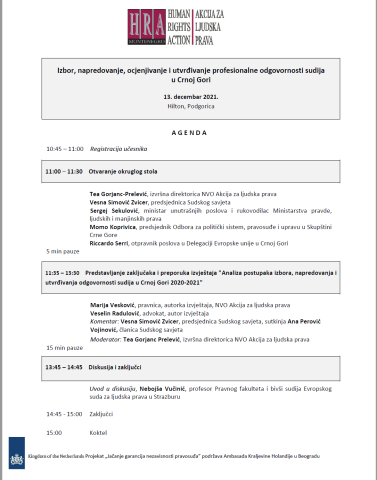 Tomorrow, on Monday 13 December 2021, at the “Hilton” Hotel (former Centre Ville) at 11 a.m., Action for Human Rights (HRA) will organise a conference to present a report on the work of the Judicial Council entitled “Analysis of the Procedures for the Election, Advancement and Determination of Responsibility of Judges in Montenegro in the Period 2020-2021”.

The report was prepared as part of the Human Rights Action’s project “Strengthening Guarantees of the Independence of the Judiciary”, supported by the Embassy of the Kingdom of the Netherlands in Belgrade.

The discussion on the report will be opened by:

Sergej Sekulović, Minister of Internal Affairs and head of the Ministry of Justice, Human and Minority Rights, member of the Judicial Council,

Momo Koprivica, President of the Committee for the Political System, Judiciary and Administration in the Parliament of Montenegro,

Riccardo Serri, chargé d’affaires at the Delegation of the European Union in Montenegro, and

as well as Dr. Nebojša Vučinić, Professor at the Faculty of Law and former judge of the European Court of Human Rights in Strasbourg.

Judges and representatives of political parties and non-governmental organisations have confirmed that they will be attending the conference.

The meeting will proceed according to the attached agenda. Please attend the meeting and inform the public about the above report and the discussion that is crucially important for the establishment of the rule of law in our country. We would appreciate it if you would confirm your attendance in advance.