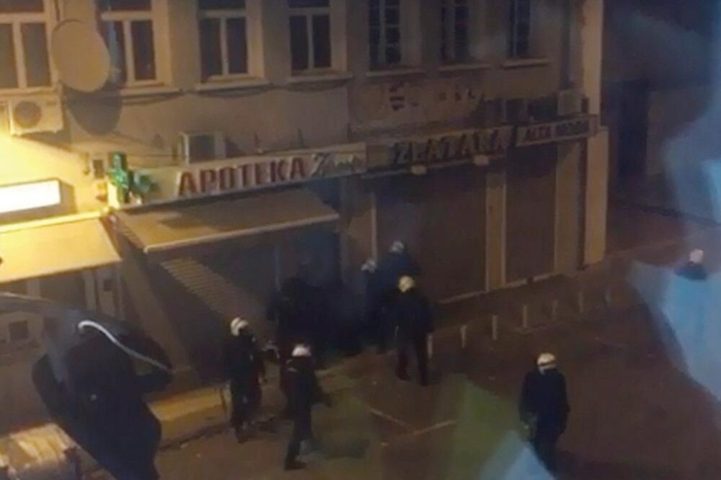 The European Court of Human Rights (ECtHR) has issued a judgment today in the case Baranin and Vukčević v. Montenegro (application nos. 24655/18 and 24656/18), finding unanimously that the State violated the procedural aspect of the prohibition of torture, inhuman or degrading treatment or punishment (Article 3 of the ECHR) due to ineffective investigation of police abuse of Momčilo Baranin and Branimir Vukčević in Zlatarska Street on 24 October 2015.

The executive director of the Human Rights Action (HRA), Tea Gorjanc-Prelević, represented Baranin and Vukčević before the Court.

The applicants were beaten by several police officers in the center of Podgorica, in Miljana Vukova Street (so-called Zlatarska Street) on 24 October 2015, at around 10:30 pm, following the breaking up of the protest organized by the Democratic Front political coalition. The two did not take part in any incidents, did not resist police officers, were neither arrested by the police nor prosecuted. That night, police officers forced Baranin and Vukčević to lie on the sidewalk, inflicted several blows on them, causing them extensive hematomas corroborated by medical reports. In addition, the police officers subjected them to inhuman and degrading treatment by shouting at them, cursing and insulting them, and then left them injured lying on the street without assistance. The incident was video recorded and the footage posted on the Internet. To date, more than five years later, the police officers who abused the applicants had not been identified, and the case is still in the pre-investigation phase.

The ECtHR found that the competent state authorities, primarily the prosecutor’s office and the police, failed to conduct an efficient and effective investigation in order to identify the perpetrators of the abuse and punish them adequately. It was found that the investigation was not prompt, thorough, independent, and did not afford sufficient level of public scrutiny, significantly diminishing its ability to identify those responsible. Also, it was determined that even after the decision of the Constitutional Court, the state authorities did not make sufficient effort to eliminate the shortcomings of the investigation and to comply with the Constitutional Court’s instructions. The Court concluded that although the Special Antiterrorist Unit (SAU) commander’s responsibility to aid the perpetrators of ill-treatment had been established and he had been sanctioned for it, that could not lead to the conclusion that the State had performed its duty under Article 3 of the Convention to conduct an effective investigation.

The Court noted that although the state prosecutor, following the Constitutional Court’s decision, continued to carry out most of the necessary investigative actions, such as examining most of the witnesses who could be traced, this was not done immediately, but only two years after the incident, despite the fact that promptness is one of the key elements of an effective investigation.

The Court also pointed out that the prosecutor did not undertake all possible investigative actions, because she had not examined all witnesses. Also, the prosecutor did not determine whether only SAU members were in the field that night, nor did she provide evidence that they included the Forensic Center in the investigation. While it is certainly possible that none of these potential investigations would have led to further clarification of the incident, the Court does not consider that this sufficiently justifies the fact that the State Prosecutor did not examine the said evidence, especially in a situation where other evidence did not identify the perpetrators.

The Court also found that, although under domestic law the applicants, as injured parties, and their representatives could have attended the examination of the witnesses and asked them questions, in the present case this had not taken place because the applicants had not been informed of the place and time of the examination of the witnesses, due to which they could not exercise their legal right.

In addition, the Court noted that the State Prosecutor, in the process of gathering evidence to identify the perpetrators, heavily relied on the assistance of the Security Center and the Police Directorate, which were subordinate to the same chain of command as the officers under investigation.

Responding to the State’s complaint that the applicants lost their victim status because the Constitutional Court had ruled in their favor and because they had received compensation in the amount of EUR 5,000 each from domestic courts and because SAU commander had been sanctioned for aiding and abetting the perpetrators, the Court emphasized the principle that a violation of Article 3 of the Convention could not be compensated only by paying damages, but that an effective investigation was also crucial. In this case, the fact that an effective investigation was not conducted even after the decisions of the Constitutional Court led the Court to conclude that they had not lost their victim status.

The Court concluded that there was no need to examine the application on the merits with regard to Article 13 of the Convention, given the violation of the procedural aspect of Article 3 of the Convention being already established.

The applicants were awarded EUR 7,500 each in respect of non-pecuniary damage. The judgment will become final if it is not referred to the jurisdiction of the Grand Chamber within 3 months.

Regarding the judgment, the director of HRA Tea Gorjanc Prelević gives the following statement:

“The special significance of this judgment is that it emphasizes the importance of achieving justice for the victims of abuse and torture. It is not just enough to pay them compensation from the budget, but also the perpetrators must be held criminally responsible. The police and the state prosecutor’s office must do their job, conduct effective investigations in order for the abusers to be detected and punished. It is unacceptable that those who abused Branimir Vukčević and Momčilo Baranin and many others have not yet been punished and are still working in the Montenegrin police. This judgment of the European Court is another confirmation in favor of the need for reform of both the police and the state prosecutor’s office. I hope the judgment will encourage victims to report abuse. I congratulate Branimir Vukčević and Momčilo Baranin for persevering with their complaints and thank them for the trust they placed in the Human Rights Action.”

HRA in cooperation with the NGO European Association for Law and Finance monitors the rulings of the European Court of Human Rights that are particularly relevant for Montenegro. It is a volunteer project of these NGOs.