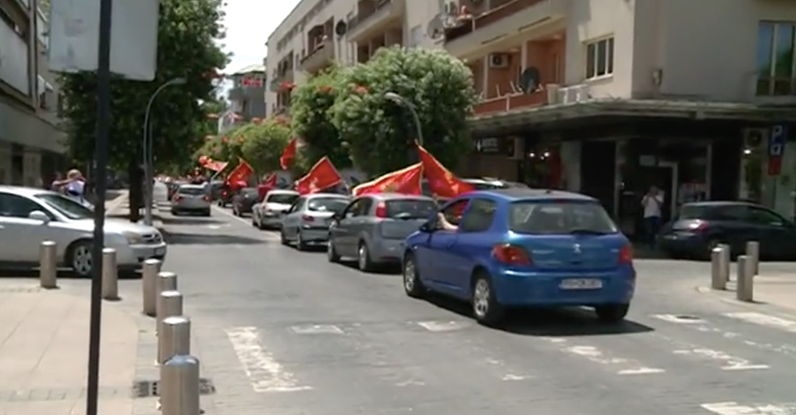 Human Rights Action (HRA) and Institute Alternative (IA) urge Police Administration to harmonise their actions and to stop selective treatments of participants of different public assemblies. During the general ban of public assemblies, police allowed citizens to gather without any restrictions, while they were warning the participants of the car-protests who were celebrating saints and were protesting because of the arrest of priests not to gather, and even prosecuted them for the excessive use of signalisation in traffic, thus showing an unequal application of the law.

The day after 12 May, when the convoy of cars gathered in honour of St. Basil of Ostrog was heading from Tivat to Budva and back, 25 citizens were invited for an investigative interview, and 14 of them were fined. Participants in such car-protests were fined because they used sound and light signals while driving, contrary to Articles 53 and 55 of the Law on Road Traffic Safety.

On the other hand, during the celebration of the Independence Day of Montenegro on 21 May, no one who participated in these motorcades, which were organised in almost all of the municipalities of Montenegro, was not fined for a similar offence, although videos available on the internet show that these citizens acted in the same way as the participants who were fined before.

Also, 13 May in Montenegro will be remembered for the protests against the arrest of Serbian Orthodox Church priests, clashes between citizens and police, tear gas and excessive use of power. Before the outbreak of the conflict, the police warned those gathered to leave stating that protest is a violation of the measures prohibiting public assemblies, and after warning the force was used, with the explanation that those gathered were the first to start violent behaviour. Also, for Independence Day, the police did not try in any way to prevent gatherings, although the ban on public gatherings was still active.

The prohibition of discrimination is prescribed by the Constitution and laws of Montenegro, as well as international human rights treaties. The Law on Internal Affairs requires that the conduct of police work is based, inter alia, on the principles of non-discrimination, legality, professionalism, proportionality in the exercise of authority and equality.

The European Court of Human Rights found a violation of the European Convention on Human Rights in cases where the authorities supported protests which they organised as they wanted, while on the other hand, they unjustifiably restricted protests of the ones critically oriented who wished to gather at the same place, at the same or approximately the same time (e.g. Makhmudov v. Russia, 2007).

Concerning the organisation of street protests, the European Court also pointed out that demonstrations in public can cause a certain level of disruption to normal lifestyles, including disruption of traffic, and that the authorities should, therefore, show a tolerance (Kudrevičius v. Lithuania). If the GovernmentGovernment has already decided not to show tolerance towards the participants in some protests, who were fined for excessive use of signalisation on vehicles, then it should have done the same with the participants of the other assemblies. Thesefindings appear as a discriminatory measure, which was obviously not necessary because the same type of behaviour was tolerated at the other protests.

Fining multiple participants can also have a deterrent effect, thus discouraging potential participants from future assemblies to participate, which is also contrary to the right to freedom of assembly.

Therefore, it is necessary for the Police Directorate to ensure that the police treat participants of all assemblies in the same way, whether they are celebrating or criticising authorities, as long as the assemblies do not promote violence and advocate the annulment of human rights.

HRA and IA jointly implement the project “Voice Your Rights! – Expanding Space for Free Assemblies”, supported by European Union through the Instrument for Democracy and Human Rights, Program for Montenegro 2018. Content of this initiative is the sole responsibility of IA and HRA and in no way reflect the views of the European Union.