A Proposal for an Electronic Petition entitled “Initiative for Adoption of a Law on Rehabilitation and Compensation of Victims of Political Persecution – Prisoners of Goli otok, Saint Grgur and other prisons” submitted 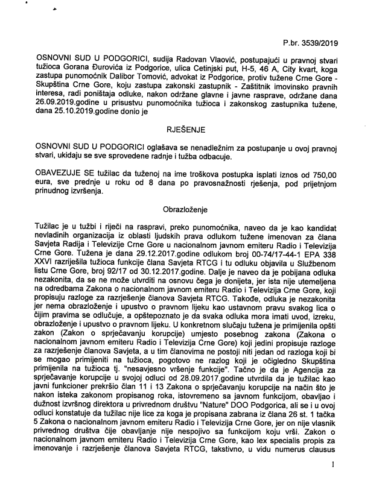 Judge of the Basic Court in Podgorica, Radovan Vlaović, dismissed Goran Djurovic’s lawsuit against the Montenegrin Parliament for lack of jurisdiction in the second trial. Judge Vlaović referred to the Supreme Court’s controversial legal position from 27 June, according to which regular courts are not competent to examine the legality of decisions of the Parliament. Djurovic has been ordered to pay 750 euros for legal costs.

Goran Djurovic was a member of the Council of the Radio and Television of Montenegro (RTCG) as a representative of NGOs dealing with protection of human rights until 29 December 2017, when the Montenegrin Parliament illegally dismissed him from this public post. The Parliament replaced Djurovic with another candidate on 9 March 2018. Since then, Djurovic has been unsuccessfully seeking legal protection against the decision on his dismissal, as no regular court in Montenegro had accepted jurisdiction to date. This omission of Montenegrin legal system has so far prevented him not only from returning to the Council of RTCG, but also from running for any other public office within four years from dismissal.

Prior to the last decision of the Basic Court in Podgorica, the High Court in Podgorica on 16 July quashed the first judgment of judge Vlaović relying on the Supreme Court’s legal position. Judge Vlaović initially decided in Djurovic favour and had annulled the decision of the Parliament of Montenegro on dismissal. However, judge Vlaović has now complied with the Supreme Court’s legal position, following the practice of the High Court, although general legal positions are not de iure a source of law and are not binding on the court.

This practice ignored the previous practice of the Supreme Court and the decision of the Constitutional Court of Montenegro (U-III No. 225/18 of 27 March 2018), by which that court had rejected Djurovic’s initial constitutional complaint for unlawful dismissal from the Council of RTCG, concluding that regular courts have jurisdiction and that Djurovic should wait for them to complete the proceedings and then apply to the Constitutional Court.

And so, after almost two years since the Parliament dismissed him from membership of the Council of RTCG, no court in Montenegro had accepted jurisdiction in Goran Djurovic’s dispute against that decision of the legislative power. Instead of providing him with the right to legal protection, the court obliged Djurovic to pay substantial legal costs only because he was taking legal action in accordance with the applicable jurisdiction rules. He is now left to appeal against the decision of the Basic Court in Podgorica, as well as to re-appeal to the Constitutional Court, which recently abolished its decision-making deadline, so its decision in this matter may be expected in a few years, when the RTCG Council in this form will probably no longer even exist.

“The denial of judicial protection to Goran Djurovic, as well as to Nikola Vukčević, Vanja Ćalović Marković and Darko Ivanović, who were expelled from regulatory bodies as representatives of NGOs, shows that there is no effective legal protection in Montenegro for those whom the political majority in the Parliament decides to expel from independent public administration bodies. This situation is discouraging for freedom of expression as well as for confidence in the judiciary, as it gives the impression that the courts are acting under orders, and for the same purpose as political authorities – to remove their dissenters from public offices in every way”, commented Tea Gorjanc-Prelević, HRA Executive Director.

CHRONOLOGY OF ACTIONS OF STATE AUTHORITIES IN GORAN DJUROVIC CASE

On 29 December 2017, the Parliament of Montenegro dismissed Djurovic from membership of the Council of RTCG, based on the decision of the Agency for Prevention of Corruption (APC) no. UPI 02-01-282/4 from 28 September 2017 that he, as the owner of the company engaged in agricultural production, violated the Law on Prevention of Corruption by failing to resign as director of the company in a timely manner after becoming a member of the Council. Although the APC in its decision emphasized that the matter was not the one of conflict of interest that could lead to his dismissal from membership of the Council of RTCG, the Parliament of Montenegro nevertheless dismissed him.

On 16 January 2018, Djurovic filed a lawsuit with the Administrative Court for annulment of the Parliament‘s decision, but on 19 January 2018 that court declared itself incompetent.

On 21 March 2019, the Supreme Court upheld the decision of the Administrative Court.

On 25 January 2018, Djurovic filed a complaint along with the injunction request to the Basic Court in Podgorica.

On 5 February 2018, judge Radovan Vlaović adopted the provisional measure and ordered the return of Đurović to the Council of RTCG until the conclusion of proceedings. This decision was overturned by the chamber of the same court on 16 February 2018.

On 28 February 2019, after more than a year, judge Vlaović overturned the Parliament’s decision as unlawful.

On 16 July 2019, on the appeal of the State of Montenegro, the Higher Court in Podgorica quashed it and returned for retrial, referring to the controversial legal position of the Supreme Court of Montenegro, which was adopted in the meantime.

On 27 July 2018, Djurovic filed an application with the European Court of Human Rights, claiming violation of his right to a fair trial, freedom of expression, effective remedy and prohibition of discrimination. He also claimed that the Chamber of the Basic Court in Podgorica, which quashed the provisional measure adopted by Judge Radovan Vlaović who ordered the Parliament to reinstate Đurović as member of the Council, in this case violated the right to a fair trial and prohibition of discrimination.