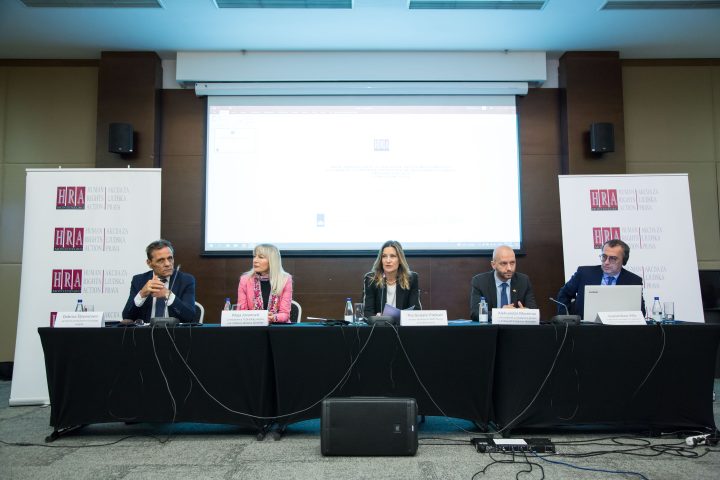 The Judicial Council (JC) and the Prosecutorial Council (PC) should start implementing the regulations without question, and this should be clearly visible, said the Executive Director of Human Rights Action (HRA) Tea Gorjanc Prelević at the conference titled “Election, Advancement, Performance Evaluation, Protection of Independence or Autonomy, and Determination of Professional Responsibility of Judges and State Prosecutors of Montenegro in 2022”.

With the support of the Embassy of the Kingdom of the Netherlands in Belgrade, HRA presented reports that analysed the work of the JC and PC from January to September 2022.

Gorjanc Prelević pointed out that progress was noted in the work of both Councils, but that valid explanations for their decisions are still missing, there is a need to act faster upon complaints about the legality of work, and it is necessary to assess the quality of work and determine the responsibility of judges and prosecutors in a more objective fashion.

In the report on the work of the PC, it was pointed out that the decisions of that Council are still not sufficiently reasoned: “This does not make its work transparent, and does not serve to improve trust in the work of the Council and the State Prosecutor’s Office. The Council must change this kind of practice”, it was stated in the report prepared by attorney Veselin Radulović in cooperation with HRA.

Last year’s recommendation – that the Government should urgently start working on new and more complete amendments and supplements to the Law on the State Prosecutor’s Office in order to ensure a more objective performance evaluation and determination of responsibility of state prosecutors – was repeated.

As noted in the report on the work of the Judicial Council, prepared by HRA lawyer Marija Vesković, the Judicial Council worked for most of 2022 in an incomplete composition, with disputed legitimacy and on the verge of a quorum because the Parliament of Montenegro was not able to elect four new members of the Council from the ranks of distinguished lawyers.

It was also noted that the Constitutional Court has not yet decided on the proposal of the JC and the initiative of 11 judges to review the constitutionality of Article 17 of the Law on Pension and Disability Insurance, which prescribes the conditions for old-age retirement of judges, or the proposal of the PC to review the constitutionality of the provisions of the amended Law on the State Prosecutor’s Office which, among other things, refer to the termination of office of state prosecutors. Also, due to the ineffective work of the Parliament of Montenegro, it was noted in the reports that the Constitutional Court does not have a quorum for decision-making either, and that these initiatives are consequently still waiting.

The Prosecutor’s Office will seriously consider the recommendations

At the conference, the Acting Supreme State Prosecutor Maja Jovanović said that the prosecutor’s office will seriously consider the report on the work of the PC, characterising it as a critical and benevolent review of their work.

She also said that the PC will start explaining its decisions better, and that she agrees that the Law on the Prosecutor’s Office needs to be amended. However, this does not fall within their purview.

The representative of the Ministry of Justice, Bojan Božović, said that the Ministry is aware of the need to amend the Law, that the first draft can be expected at the beginning of next year and that in a few months the assessment of the work of the PC will be much more positive.

He also pointed out that changes to the Constitution will be proposed in 2023, so that the Minister of Justice would no longer be a member of the JC.

Member of the JC Dobrica Šljivančanin said that he agrees that the Minister of Justice should not be a member of the Council, and that amendments to the Law on the Judicial Council and Judges, which is currently in the form of a draft, should also resolve other vague provisions of the current regulation.

Senior adviser for the rule of law at the Embassy of the Kingdom of the Netherlands, Aleksandar Momirov, pointed out that the backbone of their activities in Montenegro is strengthening the rule of law, and that in this sense it is necessary to follow the recommendations of the Venice Commission (VC), the European Commission (EC) and the anti-corruption body of the Council of Europe (Group of States against Corruption – GRECO).

Programme manager for the rule of law in the EU Delegation, Gianandrea Villa, recalled that this year’s report has highlighted the limited progress of Montenegro in the field of justice, emphasising that, apart from resolving the incomplete or ‘acting’ states of those responsible for the rule of law, it is necessary to also ensure EU standards for both Councils. He too agreed that the Councils’ decisions must be better explained.

“It is too rigorous to consider failure to declare property of judges and prosecutors a serious disciplinary offence”, she said.

However, the report shows that not even the system for determining the disciplinary responsibility of state prosecutors for disciplinary violations related to the performance of the prosecutorial office and acting in concrete cases has yielded adequate results.

Only one prosecutor was punished, with the mildest sanction, although his responsibility for the statute of limitations for criminal prosecution was established in no less than 13 cases, which is why the HRA believes that criminal responsibility should have been considered as well.

The system used to evaluate the performance of judges is not objective. The rule for determining the grade, prescribed by law, is unfair and illogical because it allows the promotion of judges whose work is unsatisfactory, in terms of both quality and quantity, as well as the promotion of those with an unlimited number of violations of the Code of Ethics.

Once again, all state prosecutors were given only excellent marks during the performance evaluation.

On 15 September 2022, the Prosecutorial Council adopted changes to the Rules on Performance Evaluation, which will enter into force on 7 October 2022 and should provide for changes to the evaluation method.

Director of the Centre for Civil Liberties (CEGAS), Marija Popović Kalezić, said that disciplinary responsibility, the Code of Ethics and the performance evaluation should be linked, and that these things must influence one another to make the work of both Councils better.

The report recalls that the new composition of the Prosecutorial Council has yet to deal with the problem of rejection of more than 90% of criminal reports from previous years due to the statute of limitations for criminal prosecution, for which only one state prosecutor has been disciplined to date.

Representatives of the executive branch of power and the President of the state made inappropriate statements that put pressure on the work and undermined the integrity of both the prosecutor’s office and the courts, but the Judicial Council and the Prosecutorial Council failed to react to any of these threats to their independence. They should react more consistently in the future.

Improvisation or hands that are tied

It was noted in the report that members of the PC did not use their newly granted legal power, i.e. the fact that three of them are allowed to schedule a session of the Council.

“The Prosecutorial Council was not ready for its obligations and responsibilities, and has resorted to unnecessary improvisations at the beginning of its work”, the HRA report pointed out.

It was further stated that the Acting Supreme State Prosecutor was not appointed immediately, at the constitutive session, in accordance with the law. After the public call and the submission of applications, the Prosecutorial Council did not choose one of the persons who submitted an application, rather selecting a state prosecutor who did not even apply for the public call.

“The decisions do not include valid explanations and reasons from which it could be concluded that the law was correctly applied in all these cases. The public was denied access to information based on which these decisions were made”, reads the report.

The office of previous Chief Special Prosecutor was terminated in a disputed manner as well. Namely, he fulfilled the conditions for old-age retirement, but there were grounds to start at least disciplinary proceedings against him and dismiss him prior to terminating his office. The Human Rights Action initiated this at the time. The manner in which the decision was made as well as the lack of explanation indicate that the goal was to replace the Chief Special Prosecutor because his work was subjected to much criticism.

Some members of the PC disagreed with these assessments, noting that the report should have contained fewer value judgments.

“I expected more comparative practices and solutions based on international standards”, noted the member of the PC Siniša Gazivoda.

His colleague Stevo Muk also had objections to the report, stating that the PC had acted correctly in relation to the termination of the prosecutors’ office, and that it is positive that a high level of agreement was reached regarding the election of the Supreme State Prosecutor and Chief Special Prosecutor.

He added that the PC had suggested to the Supreme State Prosecutor to issue a binding instruction which would make the prosecutors explain their decisions better, so as to prevent situations where citizens complain to the PC about something that does not fall within its purview.

“Our hands are tied by the current law, it needs to be changed immediately”, said Muk.

Until recently a member of the Judicial Council, judge Ana Perović Vojinović, also said something to that effect. She stated that complaints submitted to her Council frequently have to do with parties’ dissatisfaction with court decisions.

“The Rules of Procedure must define the grounds for filing a complaint”, she said.

The Deputy Protector of Property and Legal Interests Snežana Armenko said that prosecutors are complaining to the Protector about the work of the Commission for the Ethics Code of State Prosecutors.

She also added that greater attention should be paid to preserving the independence and integrity of judges and prosecutors.

Member of the PC Filip Jovović said that all the cases the Code of Ethics Commission is dealing with will be completed by the end of the year, and that changes to the Rules of Procedure related to the work of that Commission are planned as well.

Vesković added that the draft Law on the Judicial Council and Judges plans to introduce a legal remedy for all, regarding the violations of the Code of Ethics.

No reaction to the unlawful allocation of apartments

The report also pointed out that nothing has been done since last year, when the decisions of the Government Commission on the unlawful allocation of apartments to judges and prosecutors were published. The Protector of Property and Legal Interests did not initiate proceedings to determine the invalidity of the contracts on the allocation of apartments and financial assistance to state prosecutors and judges, nor did the state prosecutor’s office check whether a criminal offence had been committed in any of these cases.

A significant number of judges and state prosecutors who received Government assistance already had adequate apartments/houses; also, the adoption of some of the unlawful decisions to solve the housing needs of state prosecutors was initiated by the then Prosecutorial Council, headed by its President who was simultaneously the Supreme State Prosecutor.

“This kind of practice indicates a well-founded suspicion that these were in fact criminal acts with elements of corruption”, it was stated in the HRA report.