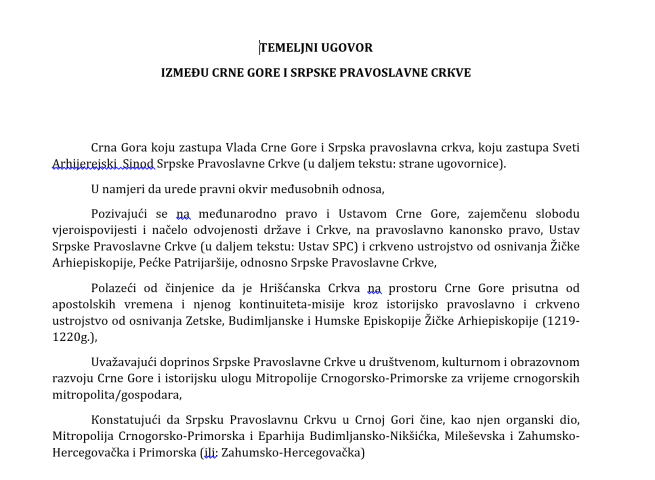 In order to contribute to the conclusion of the Agreement between Montenegro and the Serbian Orthodox Church (SOC), which would be harmonized with the legal order of Montenegro, Human Rights Action (HRA) today submitted to the President of the State and the Prime Minister concrete proposals for amending the text of the Agreement which was adopted by the Government on July 8, 2022.

With the aim of preparing the HRA Executive Director, Tea Gorjanc Prelević, for participation in the working group of legal experts, which was announced last week, HRA prepared these proposals with the participation of legal advisors: Tatjana Gogić, lawyer Veselin Radulović and Prof. Dr. Vesna Rakić Vodinelić.

Our proposals represent reasoned legal advice on how to harmonize the Agreement with the legal order of Montenegro and are not politically motivated in any sense.

The Government is obliged to conclude agreements in accordance with the legal order, which do not mislead either the SOC or the citizens on whose behalf the agreement is concluded.

Provisions of the Agreement that would deviate from the current legal framework would be null and void, and as such would not benefit either the state or the SOC.

HRA believes that, in order to protect human rights, it is necessary to change the provisions which:

Additionally, there is no reason not to correct other grave legal-technical omissions and repetition or paraphrasing of rights and obligations already regulated by the laws of Montenegro.