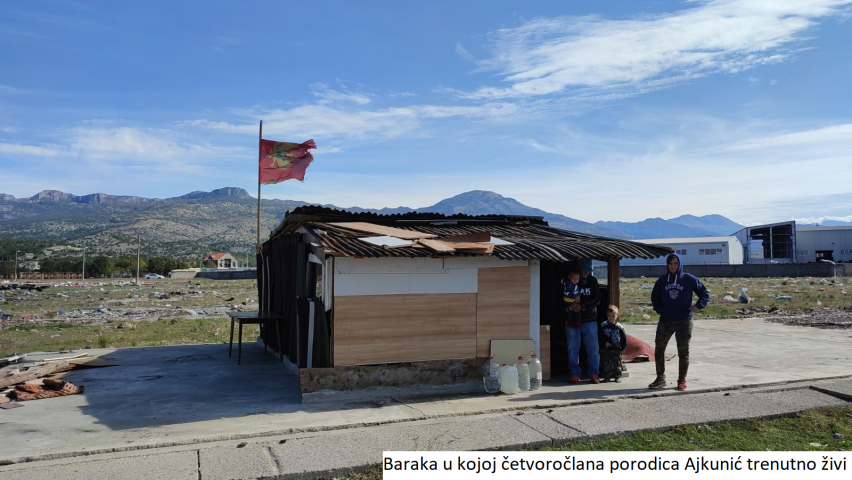 Human Rights Action (HRA) welcomes the decision of the Communal Inspection of the Capital City of Podgorica to postpone the execution of their decision by which Podgorica resident Smail Ajkunić was ordered to demolish a barrack where he lived with his wife and two small children.

The proposal for postponing the execution submitted by HRA on behalf of Mr. Ajkunić to the Communal Inspection was accepted and prevented the family with a three-year-old and a 17-month-old children from being left on the street.

Still, the living conditions in their barrack are inadequate and the family has no income, so today we appealed to the competent city authorities to continue providing assistance to the family.

In addition, since the Capital City closed its shelter for homeless, we appealed to the mayor of Podgorica, Ivan Vuković, and the director of the Center for Social Work, Marija Popović, to establish at least a protocol for taking care of homeless in some other way.

In the Ajkunić case, the Communal Inspector Nada Bojović found that the reasons for postponing the decision were justified “because … the execution of the decision would cause irreparable damage to the party, and the postponement would not oppose public interest and the nature of the relation allows it.”

In the letters directed to the Capital City and the Administrative Court, HRA requested suspension of the execution as well as that the local self-government provides the Ajkunić family with alternative housing, as otherwise, if their barrack constructed without permit was to be demolished, they would end up on the streets.

HRA highlighted that on the basis of Article 11 of the International Covenant on Economic, Social and Cultural Rights, to which Montenegro is a party, forced evictions should not result in individuals being rendered homeless or vulnerable to the violation of other human rights.

We reminded the authorities of a similar case in Serbia, represented by our colleagues from A11, where the European Court of Human Rights indicated an interim measure that the forced eviction should be suspended.

At the beginning of February 2021, Ajkunić’s barrack on Konik burned down. From March to the end of August, the family lived in private accommodation they had to abandon as they received only € 100 from the Secretariat for Social Welfare of the Capital City which was not enough to cover the costs of rent, water, electricity, and especially not to feed a family of four. After that Mr. Ajkunić built a small barrack (15m2) on state land in the Podgorica suburbs so his family could be removed from the street.

Although the Center for Social Work and the City Secretariat for Social Welfare knew about the Ajkunić’s situation, the Chief Administrator of the Capital, Vuksan Vuksanović, on September 29th rejected the HRA’s appeal as unfounded, putting the Ajkunić family at risk of irreparable consequences.

On behalf of Ajkunić, the HRA then requested a postponement of the execution to the Communal Inspection, as well as a lawsuit to the Administrative Court with a request to suspend the execution of the demolition in order to prevent the Ajkunić family with small children from being on the street.

The communal inspector, Nada Bojović, adopted our request and suspended the demolition until the final decision of the Administrative Court of Montenegro.