JUDGES OF THE CONSTITUTIONAL COURT TO RESIGN 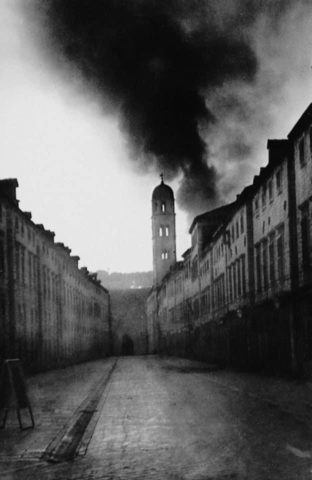 Human Rights Action (HRA), Centre for Civic Education (CCE) and Center for Dealing with the Past – Documenta remind that on this day, 6 December, 1991, the strongest shelling of the Old Town of Dubrovnik was carried out. At that time, members of the Yugoslav People’s Army (JNA) from Montenegro killed 19 and wounded 60 people. Despite our appeals over the years, the State Prosecutor’s Office of Montenegro, led by Ivica Stankovic and Milivoje Katnic, until today, has not launched a single investigation into war crimes in the Dubrovnik area.

Back in 2014, the expert of the European Commission, Maurizio Salustro, explicitly expressed the expectation that the Montenegrin Prosecutor’s Office would dedicate itself to these issues. From 2014, the European Commission reiterates in its country reports on Montenegro: “A proactive approach must be taken to effectively investigate, prosecute and punish war crimes in accordance with international standards.” The European integration process implies a willingness to provide justice for victims of war crimes as well. Hence, we expect that finally, after 29 years, court proceedings will be initiated, and appropriate verdicts will be passed to relieve Montenegro of the burden of collective responsibility.

The siege of Dubrovnik began on 1 October 1991, while the shelling of the Old Town on 6 December brought the most dead, 19 of them, with about 60 injured and wounded. The library of the International University Centre, with about 20,000 titles, was burned and many buildings in the city, which was included in the UNESCO World Heritage List in 1979, were damaged.

The citizens of Dubrovnik lived 240 days in the land and sea blockade, 138 days without electricity and water, and spent more than four months in shelters. As a consequence of the war, 116 civilians were killed, 194 Croatian defenders and 165 JNA members from Montenegro were killed, 443 people were detained in Morinj and Bileca camps, 33,000 people were expelled and 2,071 residential buildings were destroyed, which testifies to the horrific scale of this crime.

On 6 December 1991, 22-year-old Pavo Urban, whose last 12 photos testify to the attack on the old town of Dubrovnik, was killed. We also remind that the first victim of that senseless siege was the poet and translator Milan Milisic, a Serb by nationality, born in Dubrovnik, who suffered from shelling in his house.

Only two people have been convicted of war crimes committed during the attack on Dubrovnik in the last 29 years, and that was done by the Hague tribunal, although it is known that numerous war crimes were committed against civilians, such as murders, abuses, destructions and looting. The Hague tribunal sentenced the former JNA colonel-general from Montenegro, Pavle Strugar, to 7 and a half years in prison, and Admiral Miodrag Jokic, from Serbia, who pleaded guilty to 7 years in prison.

Public opinion polls on the attitudes of Montenegrin citizens, conducted this year by the CCE and the HRA, on the wars in the former Yugoslavia indicate that 83% of respondents recognize the attack on Dubrovnik as a war crime. The citizens of Montenegro recognize the then state leadership as the most responsible for the wars in the former SFRY,i.e. presidents of former republics. Respondents agree that for a better future it is necessary to cherish the memory of events that everyone would like to forget, that the place of every war crime should be marked with a memorial plaque or monument to victims, and that facts about wars in the former Yugoslavia should be included in history textbooks.

HRA, CCE and Documenta reiterate that no victims of the attack on Dubrovnik, as well as other crimes committed in the 1990s, must be forgotten. It is necessary to deal with the past in a way that justice is served. Only in this manner the prevention of crimes in the future and sustainable peace in the region can be ensured, as well as a better future for the children.

We believe that the process of European integration will essentially not be completed until those responsible for war crimes in the former SFRY are identified, prosecuted and punished. We expect the new authorities in Montenegro, like the state authorities in Croatia, to demonstrate readiness to deal with the past and crimes. The special responsibility for prosecuting crimes lies with the State Prosecutor’s Office of Montenegro, which must make efforts to, in cooperation with colleagues from Croatia, collect evidence and prosecute war crimes that were undoubtedly committed on the Dubrovnik battlefield, to relieve Montenegro of the burden of collective responsibilities.

Vesna Tersalic, Director, Center for Dealing with the Past – Documenta, Zagreb