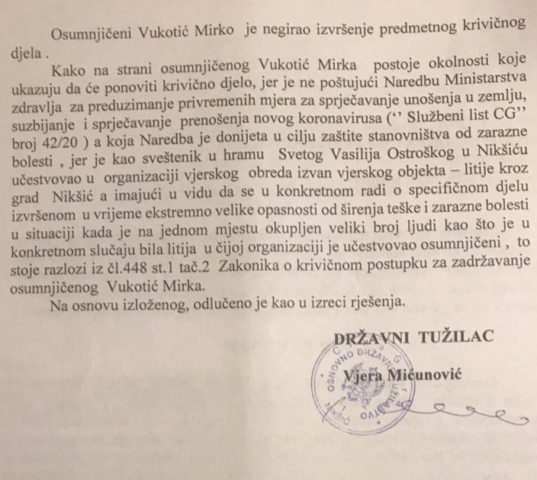 Human Rights Action (HRA) appeals to the Supreme State Prosecutor to issue binding instructions to state prosecutors instructing them to act according to minimal standards of human rights to freedom of personality, which demand convincing reasons for each detainment of each person, even if it lasts for two hours and not 72, as far as the jurisdiction of state prosecutors goes, when ordering the detention of citizens and submission of proposal for ordering detention.

After having insight regarding the Order of detention of one of the priests in Nikšić, we conclude that it does not contain an explanation of evidence on the existence of grounds of suspicion of recidivism, which is noted as a reason for detainment, which is against the European standard on freedom of personality from article 5 of European Convention on Human Rights, which demands that detainment must be based on concrete and sound reasons which are not “abstract, general and stereotypical”.

The decision of the investigative judge on the rejection of complaint against Order of detainment does not contain sound reasons for detainment. In the Order, it is noted that suspect has shown “public demonstration of civic irresponsibility, even ruthlessness in the conditions of a pandemic” by participating in the organisation of religious ritual outside of a religious object – Litiyá – despite the measures and warnings, and that same fact alone points to a conclusion that, if found that, once free, he would repeat the criminal offence. It is not noted in the explanation what the suspect has to say about it, did he threaten to repeat the criminal offence or not, is there any evidence that earlier he acted against measures or committed criminal offences and similar, in other words, the danger is presented abstractly, which points to the conclusion that investigative judge treats detention as a punishment, which is against the legal Order of Montenegro which is based on the presumption of innocence.

We highlight that this is not the first case when HRA is convinced in unfoundedness of orders of detention of civil liberties in Montenegro, so we consider that it is the right time, especially having in mind the growing tensions in the society, that it should begin to be applied very carefully, only when it is necessary, as last means in criminal procedure, in accordance to international standards of human rights.