I will raise my voice. I will take action. I will use my rights to stand up for your rights. 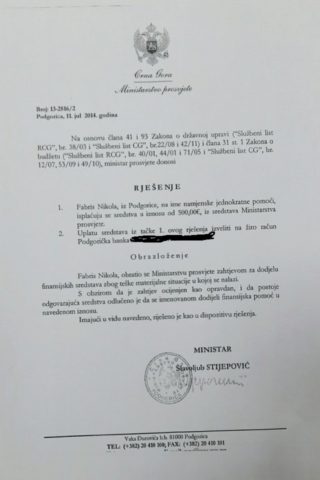 Human Rights Action (HRA) sent a letter to the Prime Minister, Duško Marković, and the Supreme State Prosecutor, Ivica Stanković, urging them to examine the legality of expenditure of funds which various ministries of the Government of Montenegro and other state budget users paid from the state budget as one-off social aid assistance to individuals for medical treatment, education or improving economic well-being from January 2014 to date and to inform public of their findings.

The documents leaked from the Ministry of Education and published by the media testify that the Ministry of Education gave social aid, on the basis of yet undetermined number of decisions, in 2014, in amounts from 300 € to 1000 € within the budgetary position “one-off social aid,” to the individuals, including former or current employees of the state, such as the current Vice Governor of the Central Bank of Montenegro and former editor of the public service RTCG, after they addressed the Ministry with “request for the allocation of financial resources due to bad financial situation” and after “the request was assessed as justified” as stated in the decisions. Those two users of social aid publicly denied that the funds were allocated to them due to their difficult financial situation, but that those were donations for publishing books. Those documents led us to look at the total amounts paid from the budget of Montenegro in the name of “one-off social aid”, “medical treatment assistance”, “education”, “improving economic well-being” or “other forms of assistance”.

HRA found that from January 2014 to October 2015 at least 4.25 million euro were paid to various individuals from the state budget for the above mentioned social aid purposes.

Namely, the Budget Law for the year 2014 only for transfers of “one-off social aid” planned the amount of 1,167,000 euros. Judging by this Law, the Ministry of Education was awarded more than half of this amount, i.e. 620,000 euros through the programs “Administration” and “Pupils and students standard”. In the second place, the Pension and Disability Insurance Fund, had 300,000 euros available for the purpose. The Ministry of Labor and Social Welfare disposed with 177,000 euros and the Ministry of Defence with 60.000 euros. Finally, the State Audit Institution also was awarded 10,000 euros for social assistance.

According to the findings of the State Audit Institution from October 2014 to October 2015, by the Government’s decisions, the Inner Cabinet of the Government and Commission for allocation of funds from the current budget reserve has been spent more than 3 million on ”medical treatment assistance”, “education”, “improving economic well-being” or “other forms of assistance”.

HRA specifically asked the Prime Minister to ensure that the Ministry of Education publish the internal act on social assistance payments from 31 January 2014 (No 01-492 / 2) as well as all decisions for the year 2014 and the last two years in order to show how the ministry interpreted the legal term “social assistance” and how it disposed with the money from the state budget and, in accordance with the obligation of lawful and transparent work of state administration, to disclose information on how much of the total funds and on what specific grounds was paid during the period from January 2014 to date on the basis of one-off social aid, in accordance with the annual budget laws that were in force at the time of payment, as well as from funds that were in the said period subsequently withdrawn from the budgetary reserve.

Although HRA believes that it is time to also reconsider public interest for the existence of parallel funds in the first place, which beyond procedures in competence of the Ministry of Labor and Social Welfare and Centers for Social Work, Health Insurance Fund of Montenegro and Ministry of Culture, allow for discretionary allocation of state funds to individual citizens to improve their financial situation, medical treatment or printing of books, it is now urgent to first review the scope and legality of funds already spent for the purpose.

In addition of appeals of NGOs to assist children and people in Montenegro living on the streets or in poverty in inadequate conditions for human beings (according to UNICEF, more than 15,000 children in Montenegro live in poverty), we recall that in December 2014 the UN Committee on Economic, Social and Cultural Rights considering Montenegro’s report on implementation of the International Covenant on Economic, Social and Cultural rights, recommended Montenegro to increase amounts of particular social welfare payments in order to provide for an adequate living standard for people and families, especially for the unemployed, elderly and people with disabilities, but this has still not been done to date.

On the contrary, the Government decided to postpone implementation of the law on the basis of which it is supposed that children whose parents are unemployed and not receiving social assistance, since January 1 this year receive allowance of only € 31.8 per month. The Government has also reduced the amount of compensation for mothers on the basis of the birth of three or more children by 25%.

In 2014 the UN Committee also recommended to set up shelters for homeless and secure proper accommodation for persons that are in absence of accommodation and still stay in a psychiatric hospital in Dobrota even though their medical condition does not require hospitalization (i.e. social patients). These recommendations Montenegro also failed to fulfil. The shelter for homeless, two years later, has not been established even in the capital of Podgorica.

In these circumstances, the question of lawful and transparent spending of state funds for ”social assistance” by various ministries is of highest social importance, bearing in mind that recently published documents provide reasonable grounds to suspect illegal and inappropriate use of these funds.