At yesterday’s meeting, the National Bureau for Education unanimously decided to include the comic book on children’s rights “Troubles with Rocky and other stories about children’s rights” as teaching material in elementary schools in Montenegro for sixth and seventh grades. The comic book is finished and will be printed within the project “Children write to the Ombudsman”, jointly implemented by the Protector of Human Rights and Freedoms and NGO Human Rights Action (HRA), and supported by UNICEF and the Swiss and British embassies.

This timely decision of the National Bureau will ensure that pupils get more familiar with the comic book in the second semester of this school year.

We are very pleased with the decision of the National Bureau for Education to allow the use of the comic book in teaching on human rights in Montenegrin schools and we congratulate everyone who contributed to this success. We believe that the comic book will contribute to children’s understanding of human rights and their ongoing motivation to exercise their human rights, and help others around them in exercising their rights. 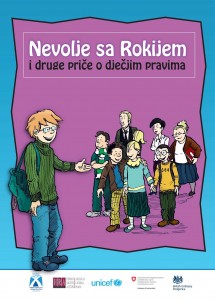