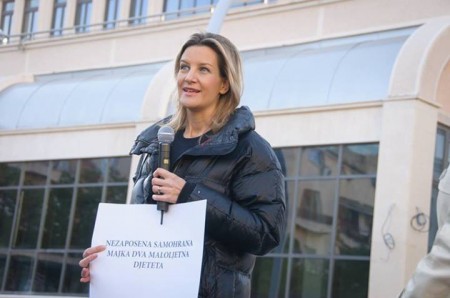 Photo by United Nations in Montenegro

The International Human Rights Day was celebrated in Podgorica with a performance “Powerwalk”, organized by the United Nations team in Montenegro. The performance symbolizes the inequality of different groups of Montenegrin society. All participants, among whom were representatives of state institutions, diplomatic representatives, the Ombudsman, the activists of the NGO sector, artists and media representatives, started walking from the same line, which symbolizes equality defined by the Universal Declaration of Human Rights. Upon statements of the moderator “I can express my opinion and participate in making decisions in my family”, “I cannot afford to pay for private health care” and the like, the participants stepped forward, in accordance with the roles they were given.

HRA Executive Director, Tea Gorjanc Prelević, in the role of an unemployed single mother of two underage children, made only three steps out of 21, in contrast to the Prime Minister or the Minister of Finance who made all the steps. It this occasion she said that the woman she represented was “likely a beneficiary of social aid that is insufficient for survival in our country. This has to change, we need to be more solidary, more aware of the help that we should provide to those in our community, on the basis of the Declaration of Human Rights that we celebrate today“, she said. Gorjanc Prelević told the citizens not to give up on their rights, to fight for them, and in addition to helping themselves they can perhaps help others, and maybe their own children not to suffer the same fate, in 10, 20 or more years.

Dawn Aiddie-Bird, from the Delegation of the European Union to Montenegro, who made all the steps in the role of Minister of Finance, said: “I think I should use my status and position as the Minister of Finance to do more for the people who were behind me.”