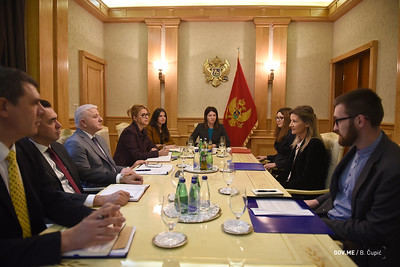 The meeting unfolded in an open and constructive atmosphere. Executive director of HRA concluded that regarding the topics discussed the responsibility lies on the Government, while HRA is willing to support solving problems in the field of human rights.

The disputed provisions of the Law on Freedom of Religion or Belief and Legal Status of Religious Communities were discussed from the aspect of international human rights standards. It was agreed that HRA delivers more precise arguments and suggestions in writing and that the dialogue on this topic should continue.

HRA representatives emphasized the special importance of application of the international standards on freedom of speech and public assembly in the pre-election period and expressed dissatisfaction with the chilling effect instilled by arresting journalists, misdemeanor prosecution and disproportionate fining for critical speech on social media. The problem of illegal dismissal of NGO representatives from the Council of Radio Television of Montenegro (RTCG) and state agencies was also emphasized. We pointed out that against such dismissal the state did not provide an effective legal remedy, and that the Draft Law on Amendments to the Law on RTCG failed to prescribe such effective legal remedy contrary to HRA’s proposal. We criticized non-transparent public debates on the Media Law and RTCG Law and the fact that proposed amendments of HRA and other NGOs on those laws as well as on the Draft Law on Free Access to Information were not accepted. We were than informed that the Ministry of Public Administration, after public debates, made a new Draft Law on Free Access to Information, on which are now waiting the opinion of the European Commission.

HRA asked the Government to demand efficient application of recommendations of its Commission for monitoring investigations of attacks on journalists (regarding appointment of foreign expert and responsiveness of the state prosecutors and the police to concrete recommendations). In view of the coming elections, we highlighted the need to provide for equal representation of all political options in the informative program of RTCG in due time. As regards the peaceful assembly, we commended the decision of Police authority to continue to secure religious processions (litije).

Regarding the problem of the lack of guarantees of independence of Judicial and Prosecutorial Council, it was agreed that HRA should deliver to the Government a draft legal provision on the criteria of independence of members of councils from the order of distinguishable lawyers, which could be used to amend current laws in view of unfulfilled recommendations of GRECO. HRA again highlighted the problem of illegal performance of the Judicial Council regarding election of judges and court presidents including the president of the Supreme Court and stated that the Judicial Council, only after HRA, MANS and IA had filed a criminal complaint against its members, improved its practice of interviewing candidates for judicial positions.

Regarding competence of the Government in the field of transitional justice, we discussed the fact that the Government has not yet answered the HRA’s initiative for drafting Law on Rehabilitation and Compensation of Victims of Political Persecution – Prisoners of Goli otok, Saint Grgur and other prisons, on the mood in the Government to consider that question, and the fact that at this point it is not its priority. HRA appealed to the Government to consider settlements with all victims of war crimes whose lawsuits were rejected due to alleged time-bar. We pledged again for separate memorials to the victims of particular war crimes in addition to the one in Podgorica erected for all civil victims of all wars on the territory of the former Yugoslavia. We asked for the police to look for new evidence in war crimes cases.

HRA also highlighted the urgent need to deinstitutionalize people who live in the Special Psychiatric Hospital in Dobrota and strengthen the community support services for the mentally-ill.