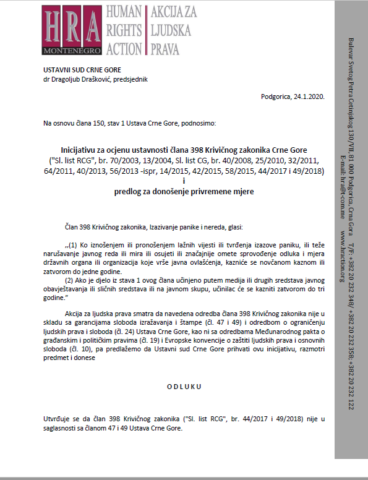 Human Rights Action (HRA) submitted to the Constitutional Court of Montenegro today the initiative to review the constitutionality of Article 398 of the Criminal Code of Montenegro (CC) Causing panic and disorder, which sanctions publication of “false news”.

The initiative is accompanied by the proposal for an injunction in the form of suspension of the execution of all individual legal acts or actions that have been taken, as well as those that could be taken under the article of the CC until the final decision of the Constitutional Court, including against three journalists, Anđela Đikanovic, Gojko Raičević and Dražen Živković, who have been suspected of committing this crime this month and were therefore also deprived of their liberty.

HRA considers that this article of the CC is not in accordance with the Constitution of Montenegro for several reasons. First, it restricts freedom of expression in order to protect public order, which is the basis that the Constitution does not provide for the restriction of this freedom. Second, the article is imprecise, allows for arbitrary interpretations to the detriment of the human right to freedom of expression and as such does not meet the standard of quality of law required by international human rights treaties. Third, the possible pre-trial imprisonment and the prescribed prison sentence of up to three years disproportionately restrict freedom of expression and discourage exercise of freedom of expression, especially through media, social networks and on public meetings with unforeseeable consequences.

The CC Article 398 is especially not in accordance with the Constitution because it does not ensure that it will be applied in accordance with elaborated standards of freedom of expression, which under certain circumstances allows for publication and transmission of false information, which may also shock the audience. On the other hand, the challenged offense also allows, for example, for punishment of jokes on the April Fools’ Day that the Martians have landed, if such news finds enough gullible readers to cause them panic. Due to undefined terms and the fact that the CC does not contain instructions for its use in accordance with elaborated international standards of freedom of expression, this criminal offense represents too high a risk of violation of that freedom.

The initiative points out that the criminal offense Causing panic and disorder is a variation of the criminal offense Defamation, which was deleted from the Criminal Code of Montenegro in 2011, while imprisonment for the same crime was abolished back in 2003, making the offense also contrary to the existing legal order.

It also highlights that the European Court of Human Rights found that the deprivation of liberty as a sanction for the transmission of false information is not acceptable, exceptionally, in cases of hate speech or incitement to violence, as it has a particularly deterrent effect on freedom of expression.

However, during the first two weeks of this year, the Basic State Prosecutor’s Office in Podgorica initiated three criminal proceedings against journalists Andjela Djikanović (FOS media), Dražen Živković (portal Borba) and Gojko Raičević (portal IN4S), in which all three were deprived of their liberty, namely, Anđela Đikanović for 28 hours, Dražen Živković for 15 hours and Gojko Raičević for about 14 hours. The initiative stated that the above mentioned practice of the State Prosecutor’s Office indicates that the criminal offense under Art. 398 of the CC apply in Montenegro and that it is usually followed by deprivation of liberty even before trial, so it is obvious that the risk of serious consequences of its application is very concrete and not just theoretical.

For this reason, HRA proposed to the Constitutional Court to accept this initiative as soon as possible, to initiate the procedure for reviewing of the constitutionality of Article 398 of the Criminal Code, to declare it unconstitutional and thus protect freedom of expression.