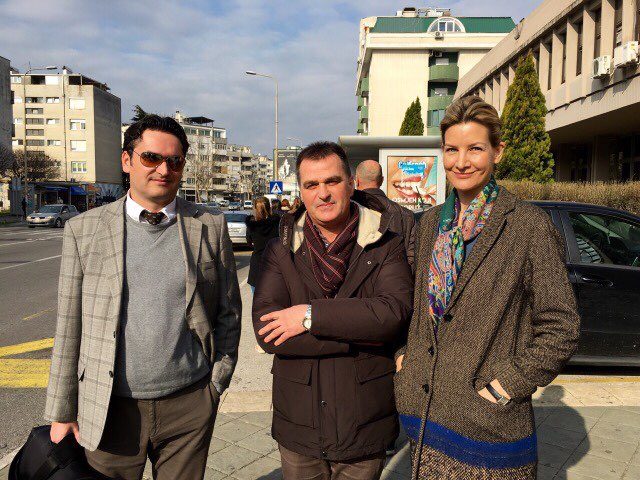 Tufik Softić with Tea Gorjanc-Prelević and Dalibor Tomović after the first hearing before the Basic Court in Podgorica on 23 February 2017.

On 6 July 2018 the Higher Court in Podgorica handed down a judgment increasing an award of damages made by the Basic Court of Podgorica against the Montenegrin state for failing to carry out an effective investigation into an attack on well-known investigative journalist Tufik Softic. (see https://www.mediadefence.org/news/journalist-wins-landmark-case-montenegrin-authorities%E2%80%99-failure-investigate-attacks)

The attack, by men armed with baseball bats, took place in 2007. In a second attack, in 2013, Tufik was the target of an explosive device thrown at his home. These attacks are believed to relate to Tufik’s journalistic work exposing the criminal activities of a gang involved in drug trafficking in northern Montenegro.  In confirming that the state had failed to comply with its constitutional and international law obligations to carry out an effective investigation the Higher Court increased the original award of damages to Tufic by €5,000 to €12,000. It also dismissed the state’s appeal against the substantive findings of the Basic Court of Podgorica.

Damages were awarded on the basis Tufic suffered emotional distress caused by the failure to investigate and because he was in fear of further attacks by this criminal group. In its decision the Higher Court was particularly critical of the delay in starting the investigation and the lack of thoroughness once it was underway. The Higher Court noted the failure of the authorities to interview key witnesses and examine important physical evidence such as the baseball bat that was used in the first attack. Importantly, in its criticism of the authorities, and in its consideration of the appropriate level of damages to award, the Higher Court relied in particular on the jurisprudence of the European Court of Human Rights.

In separate proceedings last year the Constitutional Court of Montenegro held that the state had violated his constitutional rights because of their failure to carry out an effective investigation and, for the first time in its case law, made an award of damages for violation of constitutional rights in his favour (see https://www.mediadefence.org/news/constitutional-court-montenegro-finds-failure-investigate-violent-attack-be-violation).

While the decision of the Higher Court is welcome, not least because it recognises the importance of ensuring attacks against journalists are investigated in a timely and diligent manner, the attacks on Tufik remain uninvestigated.

The executive director of Human Rights Action, Tea Gorjanc-Prelevic stated: ”We salute this judgment reaffirming that journalist Tufik Softic suffered not only the initial dreadful attack but also a devastating lack of proper response to it by the investigating authorities. Now, we must not allow that these kind of judgments become a way of the state buying off their responsibility to provide effective investigations into attacks on journalists. The Supreme State Prosecutor needs to personally ensure that everything possible is now being done in the investigation of both attacks on Softic, as well as to undertake actions to establish responsibility of state officers who were involved in the ineffective investigation. He also needs to accordingly inform the public on actions he took to prevent such failings being repeated.”

Pádraig Hughes, MLDI’s Legal Director, in welcoming the decision of the Higher Court, noted that “importantly it recognises the chilling effect physical attacks on journalists can have and emphasises the vital role of law enforcement in protecting them when carrying out their work. However there has still not been a proper investigation into the attack on Tufik Softic. If Montenegro is to comply with its legal obligations, that needs to happen now.“

Tufik Softic is represented by Dalibor Tomovic, a lawyer from Podgorica, who is working with Human Rights Action, a Montenegrin non-profit organisation, and Media Legal Defence Initiative (MLDI) from London.