The victory of the idea that human rights belong to everyone 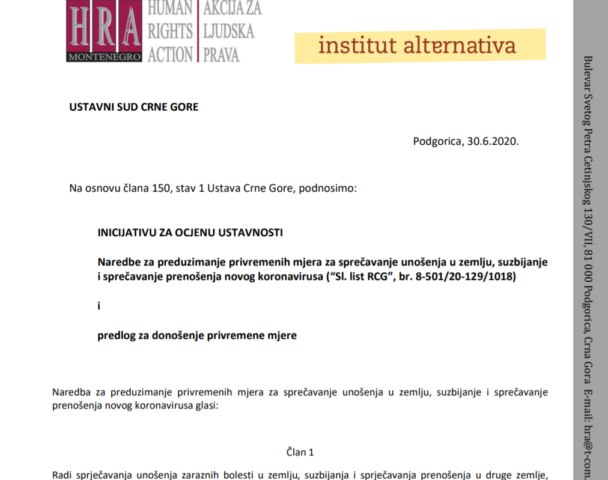 Human Rights Action (HRA) and Institute Alternative (IA) have submitted to the Constitutional Court the initiative for assessment of the constitutionality of the Order of the Minister of health on the prohibition of political assemblies and limitation of religious gatherings from 26 June 2020 and suggested those measures to be suspended.

The Order for undertaking temporary measures for stopping introduction to the country, suppression and prevention of new coronavirus from 26 June 2020, Minister of health has wholly prohibited the holding of political assemblies at open public places, while religious gatherings are limited to opens pace which belongs to religious buildings.

HRA and IA think that the Order has introduced excessive and disproportionate limitations of the right to freedom of peaceful assembly due to protection of health and that they have a discriminatory character. We consider that the goal of protection of health could have been met with less severe measures such as gathering with mandatory use of masks and keeping physical distance. We pointed out the fact that not banning assemblies in closed spaces, which carry a higher risk of disease, and not banning non-political meetings in the open, celebrations, weddings and other manifestations, shows the discriminatory character of the Order.

In the initiative, it was also highlighted that the Constitution of Montenegro in Article 52 allows only for temporary limitation but not the prohibition of the right to peaceful assembly, which was ordered regarding political meetings. During wartime or state of emergency the right to peaceful assembly can, based on Article 25, be limited “to the scope where it is necessary”, but such a state has not been declared.

The prohibition has not met the necessary balance between the protection of citizens’ health and exercise of the right to peaceful assembly, which presents the base of democracy. We noted that, for example, Constitutional Court of Germany has on 15 April 2020 concluded that the right to free protest assembly must also be secured in the time of a pandemic, with the application of limitations such as masks and keeping physical distance. The Court has in that light noted that concern of the Government regarding the protection of citizens’ health could not serve as justification for complete limitation of the right to peaceful assembly.

The Order has discriminatorily limited the right to peaceful assembly if we have in mind that public meetings in closed space were not prohibited, which present an even higher epidemiological risk, nor were public bus traffic and other assemblies which do not have a political character.

Having in mind the current practice of the Constitutional Court in the investigation of the constitutionality of orders during the time of a pandemic of virus COVID-19, which was either too slow or there wasn’t any, we do not expect that the Constitutional Court will act promptly this time. However, we do consider it our obligation to persist in the encouragement of institutions to work in the way they should in a democratic country, in the goal of protecting human rights from government abuse, and in accordance to their competences.