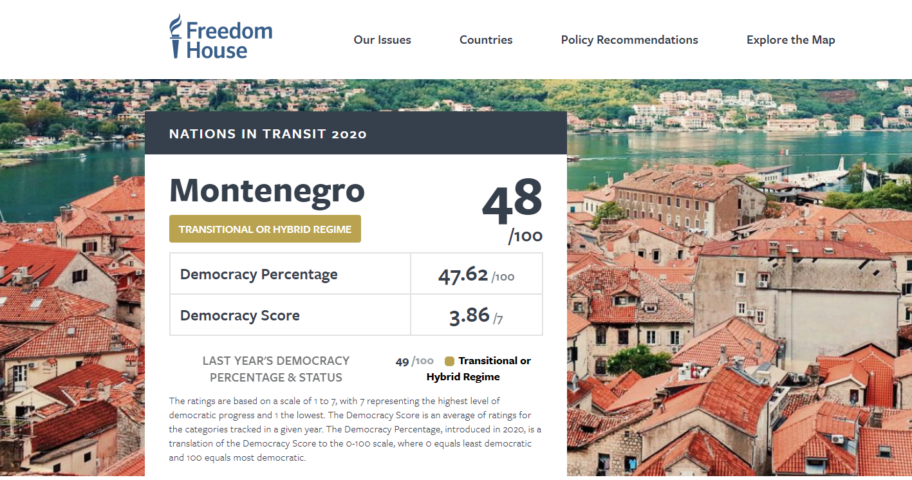 The yearly report of the respectable American organization Freedom House (FH) for the year 2019 – Nations in Transit 2020 – shows that the state of Montenegrin judiciary contributed to the classification of the country in the category of “hybrid regimes” in which state powers are based on authoritarianism as a consequence of insufficient democratic change.

Human Rights Action (HRA) reminds that the trust in the Montenegrin judiciary has fallen by the end of 2019 with a reason. Unconstitutional and illegal appointments of the president of the Supreme Court as well as six other courts in the state only highlighted authoritarian relations controlling the judiciary. Information revealed about heads of the judiciary continuing to receive apartments and/or favorable housing loans from the executive, only confirmed the existence of such relations even to those who had not followed the processes of rigged elections in the judiciary.

According to the FH report, Montenegro has regressed in the field of judiciary in comparison to 2018, so the grade of ,,legal framework and independence’’ was reduced from 3,75 to 3,50 as the last year saw several scandals. The report recalls that several presidents of courts and judges, prosecutors and police officials received apartments or housing loans from the executive under particularly beneficial conditions; that the businessman Dusko Knezevic claimed that not only had he financed the election campaign of the ruling party but had also bribed prosecutors, including the Supreme State Prosecutor Ivica Stankovic. Although this led to the arrest of the secretary of the Supreme State Prosecution’s office, Nenad Vujosevic, there was no investigation against Stankovic himself. Lack of independence and impartiality of the Judicial Council and illegalities during election of judges and presidents of courts also influenced the grade, as well as the fact that mandates of both Judicial Council members and the Supreme State Prosecutor expired, and were not filled to date by new persons who could instill trust in those institutions.

HRA reiterates that it would be necessary to secure guarantees of independence and impartiality of the Judicial and Prosecutorial councils, which decide on appointment and promotion and liability of judges and prosecutors, because that is the key condition for the protection of human rights and rule of law. Those guarantees, which should be made into law, will become convincing when membership of Judicial and Prosecutorial councils and the position of the Supreme State Prosecutor is filled with people of integrity, who have not been involved with the political party ruling over Montenegro for almost thirty years.

Last year at the meeting with rapporteurs of the Parliamentary Assembly of the Council of Europe (PACE) HRA proposed that PACE returns Montenegro back to the monitoring procedure that had ceased in 2015 in order to help the state attain independence of the judiciary. Unfortunately, this had not been accepted, although rapporteurs explicitly criticized the state of Montenegrin judiciary in their report and pointed out that they still considered it prone to political influence.

For the first time in years, FH did not place Montenegro among ,,partially consolidated democracies’’, but in the category of ,,hybrid regimes’’, characterized by states in which authorities can carry out political repression and call elections, in which democratic institutions are fragile and there exist significant challenges in defending political rights and civil liberties.

Look here for the chapter on Montenegro in the report Nations in transit 2020.