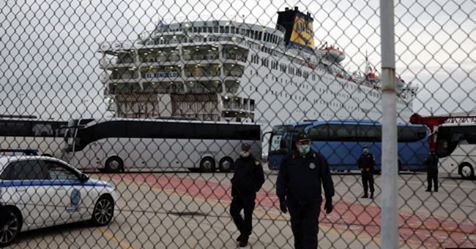 The appeal of the non-governmental organisations Human Rights Action (HRA) and the Centre for Civic Education (CCE), as well as other actors, produced certain results. Hence, the seafarer Boris Nikolić, to whom we provided free legal aid, along with 67 other Montenegrin seafarers, was released from quarantine at the Institute “Dr Simo Milošević” with a measure of two days of self-isolation, which means that from today everyone will be able to return to normal life in their homes. However, it is still not clear to us why the GovernmentGovernment does not immediately allow testing of all those placed in quarantine and all others returnees to Montenegro from countries particularly vulnerable to the COVID-19 epidemic.

On a daily basis, the CCE and the HRA receive the information from Montenegrin seafarers who are in quarantine faced with extremely poor conditions of that institutional accommodation, with no possibility of being in the open space for even five minutes per day, which significantly complicates the overall situation. At the same time, the fact that they spent the past period on the ships in months-long isolation has been ignored.

We reiterate that the measure of mandatory institutional quarantine for Montenegrin seafarers returning to the country, who have the conditions for home self-isolation, is discriminatory and contrary to the practice of other countries in the region. There is still a significant number of Montenegrin seafarers who have been unjustifiably placed in institutional quarantine and whose basic human rights and freedoms are being violated. We note with regret that the behaviour of the competent institutions, when it comes to this group, is marked by numerous and worrying controversies without clear and legally based decisions that are made or avoided to be made.

The CCE and the HRA publicly ask the GovernmentGovernment: why there is no testing of all returnees to the country who come from high-risk countries when they enter Montenegro instead of being placed in quarantine under conditions that nullify the purpose of the quarantine itself? We especially emphasise this because, according to the decision of the GovernmentGovernment, almost all citizens who spent 14 days in quarantine are tested for SARS-CoV-2, so after obtaining a negative result, their self-isolation and quarantine measures are abolished. Also, the Government of Montenegro often states that during the coronavirus epidemic, significant funds were collected through donations, so there is no problem of lack of funds for the procurement of tests.

In addition, yesterday we had the opportunity to hear the expressed astonishment of Vesna Miranović, Deputy Minister of Health, who stated in the media: “This kind of rebellion that is born among seafarers is quite unusual, given the fact that we are directing out acting towards the virus but not the population. “This statement obliges Ms Miranović to publicly explain how we have privileged individuals, such as owners and crews of private yachts that enter the Montenegrin sea, then passengers of non-commercial flights, small planes and helicopters up to 10 passengers, but also transport workers who come to Montenegro, such as truck drivers who bring goods from abroad, and who are not placed in quarantine when entering Montenegro. If the Government’s prescribed measures are aimed exclusively “towards the virus, and not toward the population”, why then do the measures, and their practical implementation, bring upon variable treatment to different parts of the population?

We hereby invite the Ministry of Health to inform the public whether and which complaints of seafarers have been adopted because we also find in this field unclear and legally questionable approach. Furthermore, we call the NKT to publicly announce whether the identical treatment was applied to all seafarers who entered Montenegro in the past ten days and before the decision which in part, although insufficiently, facilitates their return. We invite the NKT to explain the logic according to which their transport is allowed only through the airports of countries that are on the Montenegrin white list, and not others, when at these airports are passengers from various countries, especially having on mind that seafarers are usually unable to choose the port of disembarkation or the route of return to Montenegro.

The HRA and the CCE also note that the judiciary does not recognise its role in these cases, and we point out that the High Court did not respond to the appeal against the decision of the Basic Court in Herceg Novi, which declared itself incompetent.

Finally, the CCE and the HRA call on the Ombudsman to state what he has done so far to address this issue because we know that the seafarers addressed him last week. The Ombudsman visited the Vučje quarantine today, although the seafarers from quarantine at the Institute “Dr Simo Milošević” had contacted him before and the CCE addressed him on the same occasion. We expect him to inform the public in detail about what he has done and why he only today visited one of the quarantines in which Montenegrin sailors are housed.