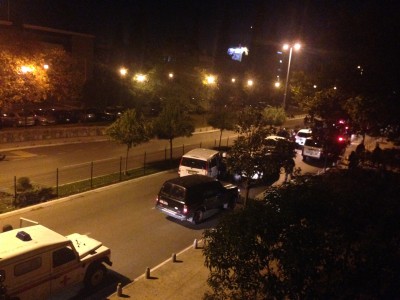 The Council for Civil Control of Police has, in its 55th session held at the Parliament of Montenegro on 26 October 2015, based on Article 112 of the Law on Internal Affairs, reviewed the complaints it received concerning the application of police powers.

At today’s session the Council concluded its work based on complaints related to three cases of brutal police action:

The case of citizen Milorad Martinović

The Council for Civil Control of Police, hereinafter referred to as “the Council”, in its 55th session held on 26 October 2015, composed of Aleksandar Saša Zeković, PhD Branislav Radulović and Jovan Poleksić, acting on its own initiative and upon complaints filed by the NGO Civic Alliance (Građanska alijansa), a group of citizens acting under the name “Građanski”, reports of citizens Mladenko Savić and Tea Gorjanc Prelević, and two citizens that requested anonymity, reviewed the actions of police towards citizen Milorad Martinović, and adopted, after reviewing detailed video materials and discussing the matter, the following

1. On 25 October 2015, the Council was informed at 12:44am by citizen Tea Gorjanc Prelević of her knowledge that near her building she saw and filmed a citizen who was lying motionless on the pavement before being approached by police officers. She also expressed concern about the health of this citizen, since at that moment, from her perspective, the citizen wasn’t showing any signs of life. The police officers present ordered her to enter her apartment. Later when the police had cleared out, the citizen was no longer to be found at that location. Attached with her report she included two photographs. In an additional communication, at 12:45am, the same citizen specified that her photos were taken exactly at 11:20pm. The members of the Council were immediately informed about the citizen’s message, and on the same day at 12:51am, the Council, through its President, notified the leadership of the Police Directorate and the Ministry of the Interior, asking for information on the health and the identity of the citizen from the photographs provided.

2. On 25 October 2015 at 2:00am the Council was able to establish contact through social media with the citizen in question, who requested anonymity (but whose identity is known to the Council), who provided photos of a demolished car, and provided a statement that a group of police officers allegedly brutally beat the driver of that vehicle and destroyed the car.

3. The Council published photos of the vehicle and called on citizens that had witnessed the event to contact the Council.

4. After a few hours, the identity of the citizen was announced and several video recordings of the event were released that point to the police’s behaviour as well as photos of the citizen Milorad Martinović that confirmed his injuries. The information about this incident was also reported to the media.

5. The Council subsequently received complaints from NGO Civic Alliance and a group of citizens acting under the name „Građanski“ as well as reports by several citizens who noticed the police’s unprofessional conduct. All of them, and particularly NGO Civic Alliance, provided video footage that indicates serious suspicion of the abuse of power and excessive use of force against a person, as alleged in the complaint, who wasn’t a protester and the destruction of his private property. The Council carefully considered the available material through its work on this case.

6. The Council has, on the basis of the available documentation, concluded that there was a clear use of excessive force by law enforcement officers in this specific intervention.

7. The Council concludes that the police officers acted unprofessionally towards citizen Milorad Martinović, overstepping their authority, and that he was also subjected to torture, inhuman and degrading treatment, during which he was severely injured and his vehicle destroyed.

8. The Council requests that the Police Directorate identify all the police officers involved in this concrete case, who by their actions overstepped the bounds of lawful police conduct, as well as the basis for proceeding in this case and the relevant chain of command for this action.

9. The Council, on the basis of its statutory powers, requests that the Police Directorate release this information as soon as possible to the public, in order to preserve the overall credibility of the police force, particularly bearing in mind that this case has disturbed the public.

The case of journalist Gojko Raičević

The Council for Civil Control of Police, hereinafter referred to as “the Council” in its 55th session held on 26 October 2015, composed of Aleksandar Saša Zeković, PhD Branislav Radulović and Jovan Poleksić, considered the complaints of citizen Gojko Raičević, a journalist from Podgorica, as well as a group of citizens acting under the name “Građanski”, who were aware of the actions of police officers toward journalist Gojko Raičević, adopting, after reviewing detailed video materials and discussing the matter, the following

1. Based on these complaints, the Council concluded that excessive force has been used upon citizen Gojko Raičević who was not resisting.

2. The Council demands of the Police Directorate to release the identity of the police officer responsible as well as information regarding the prosecution of their actions, and inform the public of this as well.

The cases of citizens M.B. and B.V. who suffered beatings by police officers in Miljana Vukova St. (Aka. Goldsmith’s street)

The Council for Civil Control of Police, hereinafter “the Council” in its 55th session held on 26 October 2015, composed of Aleksandar Saša Zeković, PhD Branislav Radulović and Jovan Poleksić, considered the complaints of citizen Mihailo Jovović, a journalist from Podgorica, the NGO Civic Alliance from Podgorica, as well as those of a citizen group that operates under the name “Građanski”. These complaints detailed the actions of police officers towards the individuals M.B. and B.V. in Miljana Vukova Street in Podgorica. After reviewing detailed video materials and discussing the matter, the Council adopted the following

1. The Council has found that in this case the police officers harshly violated these individuals’ personal dignity.

2. The acting police officers used excessive force towards the citizens, who at that time provided no resistance.

3. The Council expresses worry over this incident, and believes that the main issues were the use of excessive force and the abuse of authority, which imply unworthiness of discharging police duties and a serious breach of police ethics and the overall integrity of the Police.

4. The Council demands of the Police Directorate to inform the public without further postponing about the identity of the police officers in question, to prosecute them for their responsibility, as well as to recognize the objective responsibility of their superior.
The Council will continue its work on additional complaints, and on that basis requests information from the Police Directorate and the Ministry of Interior.

The Council for Civil Control Police