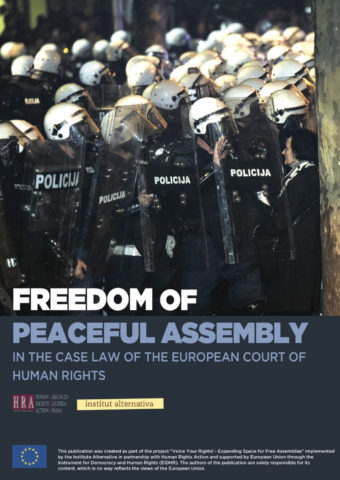 The NGO “Human Rights Action” has published a handbook titled: “Freedom of peaceful assembly in the case law of the European Court of Human Rights.”

The standard is the bare minimum which Montenegro is obligated to provide its citizens. As such, State authorities, especially the police, state prosecutors and judges, must apply it. However, they may also implement a higher standard of law than the one presented in the handbook.

The handbook explains that the right to freedom of peaceful assembly protects only those gatherings which are not violent in nature, or rather, the non-violent participants in such gatherings. State authorities are required to tolerate even unannounced peaceful gatherings which, for instance, may have come about as a spontaneous reaction to some event, and which do not disrupt public order and peace to a high degree. The European Court has emphasised that the freedoms of assembly and expression are cornerstones of democracy, and that those assembled at a peaceful, unannounced gathering must be given enough time to deliver their message before the gathering is dispersed.

The handbook was created as part of the “Voice Your Rights! – Expanding Space for Free Assemblies” project, a joint effort by the NGOs Institut Alternativa and the Human Rights Action. The project was made possible by the support of the European Union Delegation in Montenegro. The authors are Tea Gorjanc Prelević i Stefan Šljukić of the Human Rights Action.

The handbook is available in both Montenegrin and English on the web-pages of HRA and IA.