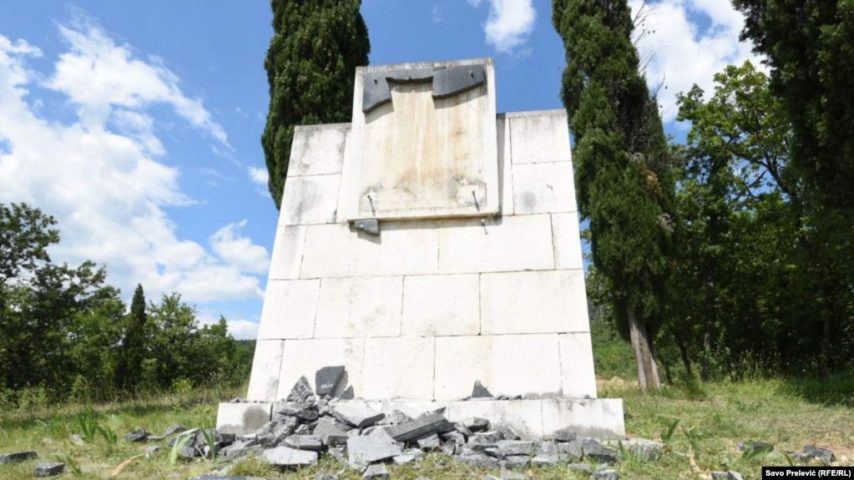 The non-governmental organisations Centre for Civic Education (CCE), Human Rights Action (HRA) and Centre for Peace and Women’s Education – ANIMA with great sadness and disappointment received news about the desecration of the monument to the organisers of the Uprising on 13 July 1941, the first nationwide anti-fascist Uprising in conquered Europe. We expect the police to detect the perpetrators urgently.

The desecration of every cultural good is a primitive and anti-civilisation act, but the destruction of the anti-fascist symbol also means support for the ideas of fascism and collaboration. The monuments of the National Liberation War are not only the cultural and historical wealth of all citizens but also the valuable heritage of our society which we, as the only one in the region, managed to preserve in the darkest 1990s. This underscores the obligation of the competent authorities to identify and prosecute individuals or organisations who committed this act as soon as possible.

If it is an act of individuals, it represents a serious reminder of the need to reflect at educational policies and the lack of knowledge transfer about the anti-fascist tradition, anti-fascist ideas and their significance for shaping modern civil society. It is very important that we do not allow the development of unscientific nationalist revisionism to which Montenegro has resisted for a long time. Part of the cause of this vandalism is in someone’s radical ideological conviction filled with hatred and desire to destroy, with extremism and violence as the consequences.

If there is an organisation behind this act, then it requires a systematic and dedicated approach of competent institutions to suppress and ban extremist groups. Moreover, there would be a need for broad public debate in which it will be analysed how an organisation of that kind appeared and what can be done within the educational and legal framework to timely prevent attacks on anti-fascist legacy and revitalisation of fascism and collaboration.

It is a particular obligation of the authorities to prove an anti-fascist commitment, as they rhetorically insist on those values whereas it does not mirror into practice. This includes, in this case, detecting and punishing of the perpetrators of this act, but also meaningful and continuous work on the protection of the anti-fascist heritage.

Ljupka Kovačević, coordinator of the Centre for Women and Peace Education ANIMA